Update: This product is being taking off the direct to customer market. See this post for more information.

I received a free can of Interflon Fin Super for review a while back and have been using it on my guns and in a few around the house applications. Here is a portion of the email I received about it:

I am writing to you because I represent a  lubricant called Fin Super.  Fin Super is a multi-purpose spray.  It is not very well known in the states, but has been used for a number of years by military and police brigades for firearm lubrication in Europe.

Do you accept product to conduct reviews on your blog?  If so, I would be happy to send you a sample to try.  The feedback I get is always overwhelmingly positive.

I have included some info about Fin Super.  In the attachments you will find:

A copy of the article is included in text form lower in the email.

Lastly, here are some useful links:

Here are the two supplied reviews of the product and a picture of the container:

You can purchase Interflon Fin Super from Amazon.

I have been wanting a dry lubricant for my guns for some time. I frequently am in a very dirty environment and the oil on guns attracts even more dirt. Notice the dirt build up in the rear of the slide below: 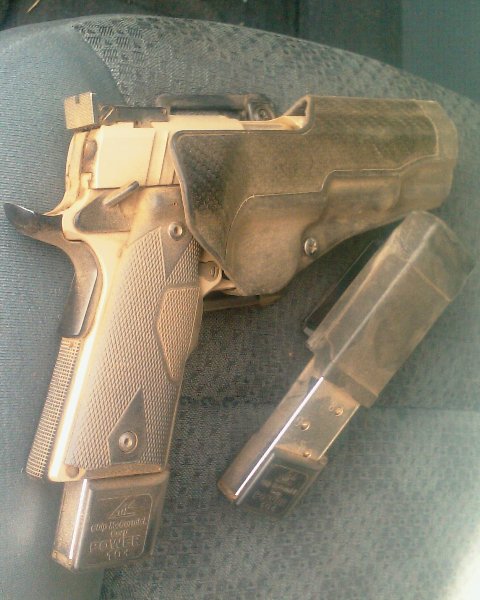 Another problem with liquid lubricants, particularly with my .22s, it seemed that they contributed to the build up of powder residue in the receivers. Dry lubricants should reduce that problem.

And finally I have shot in matches where it was very cold, sub-zero, and because I had been using appropriate lubricants I had higher scores than Master class shooters because their guns turned into single shots instead of semi-auto because the slide would not go into battery without manual assistance. Dry lubricants don’t have this problem.

I had two main concerns I wanted to test:

I was initially annoyed when I applied the lubricant as directed and even after 24 hours the interior surfaces of the gun were still wet. I agree with one of the supplied reviews on this topic (emphasis added):

One essential – and actually, in terms of the way it appears, almost unique – characteristic of Fin Super is that it is a semi-dry detergent-lubricant-protective product (the manufacturer considers it to be “dry”, but we think our definition is more accurate). After it has been applied to metal after giving the bottle a short but necessary shake, it evaporates slowly leaving a highly adhesive film offering the great advantage that it does not grease or stain the hands and clothes, nor does it attract dust or dirt.

I had closed the action of the gun and put it in my holster with a loaded magazine and a round in the chamber. Of course evaporation is going to be unlikely in that environment. I tested it again by leaving the gun unassembled and having an incandescent light bulb shine on it from a few inches away overnight. The surfaces were no longer wet but had a film that wasn’t really wet and adhered well.

After shooting hundreds of rounds through the gun the barrel cleaned up easily. Perhaps easier than it would have with Friction Defense. The film was still detectable with a rub of your finger over the surfaces and hence the lubricant had passed my two tests. But the slow drying brought up another question.

What if you were to apply the lubricant and take it into a cold environment before it had dried? The same reviewer I quoted above had this to say (emphasis added):

Let’s take a look at the stated chemical and physical properties: this is a semi-synthetic PTFE (Teflon) oil with a medium density (0.85 grams per millilitre at 20°C), flash point at 80° C and self-ignition at 370° C, a muddy yellow-nut brown colour common to many products to which Teflon has been added, almost insoluble in water, usable between -43° C and +170° C (although it should be pointed out that after application and vaporation of solvents the product remains effective at between -200 and +300° C).

Okay. -43 C (-45.4F) is probably below the temperature I will be using it. But what does “usable” mean? Will the gun still cycle at low temperatures? I applied the lubricant to all the usual surfaces of the gun and without wiping the excess off put the gun in the freezer (6.2F) for several hours. When I pulled it out it was almost instantly covered in frost. I should have taken a picture because it was a pretty funny looking gun with the frost growing on all the metal surfaces. But despite the cold and frost the slide and hammer moved as freely as they do at normal temperatures.

Interflon Fin Super has passed all my tests and I’m now using it on all my guns (when I get around to cleaning them). The price does seem to be a bit high ($28.00 + $7.49 shipping from Amazon). But at the current rate of consumption I’m sure the can will supply enough lubrication such that each gun cleaning will only amount to a few pennies. I can live with that for the benefits of having a semi-dry lubricant.