Several months ago Joycie expressed an interest in learning to shoot a gun. She had a couple scary incidents. One where she thought someone was in her house and another incident where a suspicious person was in her backyard.

Of course I immediately offered to take her to the range but for various reasons it didn’t happen right away. Finally Barb made the reservation for the training bay at the local indoor range and Joycie and her husband Michael put that time slot on their schedule. Here is the story from our time on the range last night:

They did the paperwork with the range, got the range safety briefing. We then walked through the normal range with stalls about half full of people shooting. Joycie jumped every shot fired but made it through to the training bay without chickening out. There we took off our hearing protection set up a table about 15 feet from the target line.

I’ve only one other student who was more nervous.

I started them out with the Ruger 10/22 with a suppressor so we could talk without hearing protection: 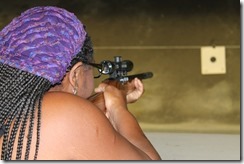 It was really too close for the scoped rifle, the target was just a little bit blurry, and the hits were an inch or so low from the point of aim. But these were new shooters and I wanted to make sure they could hit the paper without difficulty. They both did great with it.

Next I put the suppressor on the Ruger 22/45 and showed them how to shoot it: 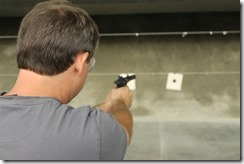 Michael had no problems with it but it took Joycie a while to get the hang of getting both sights lined up on the target.

Next they tried the .22 LR revolver: 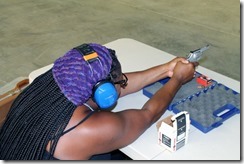 With no suppressor and such a light gun even the recoil from the .22 was intimidating to Joycie. She was able to settle down enough to get good hits by sitting at the table.

We were running out of time and I gave her the option of a 9mm or .40 S&W pistol or an AR-15. Joycie asked if the AR-15 was an Uzi and if it would shoot out all the bullets one after the other. I smiled and told her no. It was an AR-15 and it shot one bullet for each pull of the trigger just like the other guns she had been shooting. She chose the AR-15.

Michael emptied a 30 round magazine with excellent hits in probably two or three minutes. We were very short on time and Joycie fired maybe five rounds with decent hits before we had to pack up and leave before they locked the doors on us.

As is usual, there was the new shooter smile and Joycie wants to try that again: 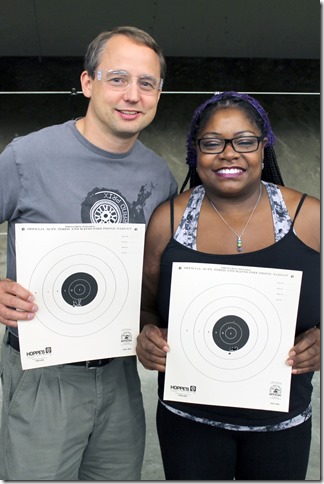 Joycie also wants to see what competition is like and may show up to watch a pistol match sometime soon.