I participated in a USPSA match on Sunday. It was the largest local match I have ever participated in. Originally they told us 97 people were attending but the results only show 92 so maybe some people left without shooting. That would be entirely understandable. It was a hot day for the Seattle area. It was 97 F when I left. The sweat was dripping off of me most of the time and I consumed two liters of water without once using the bathroom. Including my travel and registration time I spent 10 hours participating. It’s a good thing it was fun.

Marysville Rifle Club has stages that are more complex and challenging than those I have found at any other club. Don’t fool yourself into even thinking for even a millisecond these are anything like real life scenarios. They are problems to be solved using gun skills and your ability to move. It’s a game and this match demonstrated it better than any other match I have attended.

Here is an example: 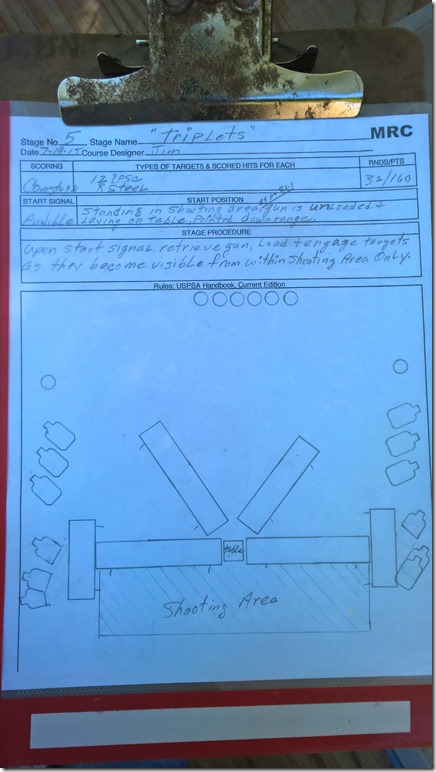 Other stages were difficult because there were targets which were hard to find even when you weren’t on the clock. I, as well as many others, overlooked one target because of this and got a lot of penalties for it.

One stage required us to run about 60 feet then shoot a bunch of targets. I ran, shot targets, started to move to the next set of targets and reached for one of my four spare magazines on my belt. Three of them were gone. My stopping at the first set of targets caused the magazines to fall out of their holsters. This was a 30 round stage and I had just dropped one of my two remaining magazines that still had ammo in it. I had planned to do another reload when I moved between target arrays again. The magazine that remained was my one special magazine. It has a special follower that allows it to hold 19 rounds of .40 S&W. Along with the “super powers” the follower has a flaw. It doesn’t lock back the slide when the gun is empty. For this reason I don’t normally use it but it gave me 20 rounds in the gun and I decided to continue on without going back to look for the missing magazines or pick up the one I just dropped from the gun. I finished the stage with one round to spare.

An unusual thing did happened on a couple stages which can be blamed on the polymer coated lead bullets. They produce a lot of smoke. When shooting targets in deep shadows while the gun is in the bright sunlight the targets would sometimes nearly disappear in the smoke after a couple shots. The smoke reflected the sunlight creating a bright cloud between me and the targets.

As interesting as the previous stages were they weren’t the “best” one. Check this one out: 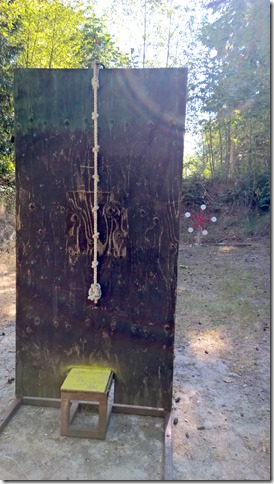 See the Texas Star on the right? Here is someone shooting one the conventional way:

In our case we had two Texas Stars. One on each side of the barricade. We also started the stage over 100 feet away and had to shoot 11 other targets on the way to the barricade.

It turns out that barricade has a special name. It’s called a Rhodesian Wall. The 1996 January/February issue of Front Sight, the USPSA magazine, had this to say about Rhodesian Walls:

With a Rhodesian Wall, which is not commonly used any more, the shooting position is a raised box behind a wall with a stout rope hanging down the middle. The problem is that the wall is so wide that you can’t shoot around it except by holding onto the rope with one hand, leaning around the edge and shooting one-handed while keeping the feet on the box.

Here is one of the participants in Sunday’s match practicing on the wall:

Yes. You had to shoot small moving targets one handed, around both sides of a barricade, while dangling from a rope, after running over 100 feet.

I have never seen such a difficult stage before. Many people in our squad ran out of ammo before hitting all the plates on the Texas Stars. One guy left three plates on one star and hadn’t even shot at the other one. With misses like that you end up getting a zero on the stage. There were stage times approaching 200 seconds. And I saw one guy get disqualified for breaking the 180 on this stage.

That was my high point of the match. I also did decent on the classifier for a change. I might actually get my classification back up into the B range with that stage.

The worst stage was where I overlooked the target and had a miss on another target racking up 40 points in penalties.

I had misses on other stages as well. It was very common with even Master and Grandmaster shooters having misses.

Overall I was pleased with the results. My gun ran perfectly. But the fiber optic front sight insert did disappear sometime along the way, I think it might have been on the Rhodesian Wall stage. It is very fragile and I had to shoot through a port there (as well as several other stages) and it is easy to bump it on the edges of the port. But the irons were still fine and I didn’t really miss it.

Here the blog post of Loke Tan who was at the match and came in 3rd overall. He also made a video of him shooting each of the stages: