I went to the range today and tested various ammo in my Ruger 22/45.

This target was made shooting five rounds offhand at 25 yards with CCI Standard Velocity ammo: 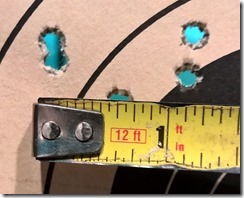 This is the same target after I fired another five rounds with Federal “Target Grade Performance” “Auto Match” (AM22) at the same range: 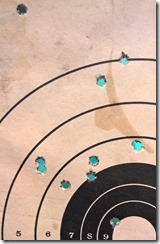 Other people also report accuracy issues with the Federal ammo and others report problems with reliability.

I shot more groups at seven yards with similar results. The Federal was far less accurate than the CCI. I shot some old CCI Blazer at seven yards. The one flyer was my fault. There are four rounds in the hole that looks like only two shots: 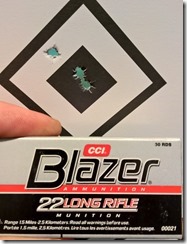 I shot some more rounds through my new STI DVC. The following are five rounds at seven yards: 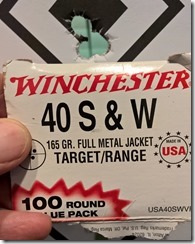 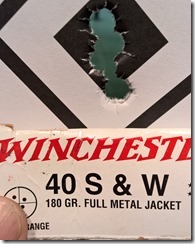 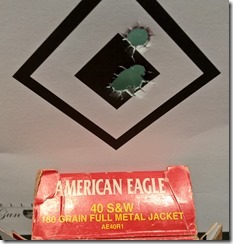 I then tried some handloads that used 180 grain Rainer Restrike JHP bullets. The results were terrible. I moved the target to 25 yards to see if there was some key-holing or something. Only one bullet was on the paper! It looked like a normal hole so I moved the target to 10 yards and saw what I was expecting: 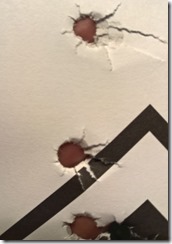 It’s most obvious with the top hole. See the “grease mark” out to the right of the hole? That’s from the bullet striking the paper nearly sideways. Notice the other holes with the asymmetric tearing? Compare those holes to the holes from the factory ammo. The factory ammo has symmetric holes. The Rainer Restrike handloads are unstable in my gun.

Ammo matters. It matters a lot.