I arrived on site about 2130 on Sunday night. I unloaded the stuff out of my vehicle into Boomershoot Mecca and reloaded it with my tent, sleeping bags, blankets, pads, pillows, and other stuff. I set up the tent using the headlights to see and I was finally in bed by 2340. The next morning I assembled some shelves and tidied up a bit until it was time to start work. I considered working from “home” at Mecca but reconsidered when my fingers went numb. It was 34F in there so I went to brother Doug’s house and spent the morning working from there.

The afternoon and evening at Mecca was nice. I rearranged a few things for a better work flow (the computers are for work and personal use):

I then made the test targets for the experiment I completed last night.

Yesterday morning while it was still to cold to work I went for a walk and take rubber bands and empty milk jugs to the Taj. I discovered a squatter in the explosives magazine: 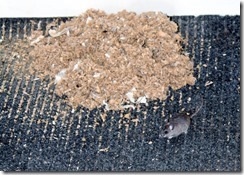 It was ejected from the premises and the carpet cleaned up as best I could with a hand broom:

I left some treats in case they or some relatives decided to visit again:

I then proceeded on to the tree line where most of the Boomershoot targets are placed and put up some steel targets: 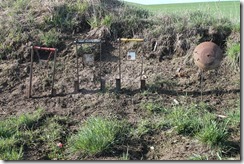 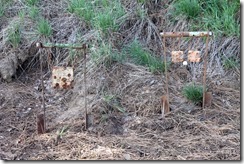 We will paint them before the event.

Today I discovered one of the scales we use for measuring the chemicals for Boomerite was having problems. Putting in new batteries and banging it around didn’t help any. I probably paid $20 for it something like five years ago and it has had problems before. I set it aside and ordered a $300 scale just like the other scale I have from Amazon for next day delivery.

Today I’ll tidy up the work benches in Mecca more and move the ATV and trailer here. I might also turn some of the clumpy (basically fist sized rocks) Potassium Chlorate into powder too. I have a new shipment coming in on Friday but if I can use the old stuff that would be better. The stuff I used for my experiment this week was made from the old stuff so I know it is chemically active if I just reduce it in size appropriately.

Boomershoot is looking good for this year. Even the weather is looking great. No chance of rain and highs in the upper 60s. There will be some winds to make things a little bit challenging but probably nothing that will be insurmountable. The winds start out low and build to a peak about 4:00 PM every day. Plan accordingly.