I shot in another USPSA match on Sunday. It was raining. At times it was really pouring. At other times it was a mild drizzle. It never stopped.

One of the guys at the match has been to a couple of Boomershoots and I know both he and his wife from outside of the gun community. He came up to me, said hi, and I told him it seemed a little damp. He said, “I’m not staying. I just came to check on my stage.” He had a shovel over his shoulder and had dug a ditch to carry some of the water away. 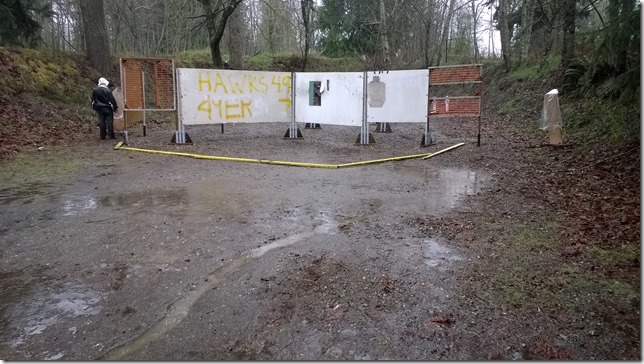 I have been practicing and then testing myself with El Presidente. Here are the results from January 30th of this year. To make it easy for the spreadsheet and to reduce the need to tape the targets I only track the strings where I got all A-zone hits:

This sucks. I had no idea how slow I had become until I did this test.

And from February 12th:

Better but not by much. Things still weren’t clicking. I had to really go slow to get the A-zone hits. This was especially true with the first shot after the draw and the split times for shots on the same target. It shouldn’t take almost as long for a second hit on the same target as it did for a transition to another target over three feet from the previous one. Why was it taking so long to get on target with the sights and pull the trigger? I just didn’t know.

From March 11th, a few days before this match:

When I shot the match on Sunday things felt a lot better. The gun went bang without me thinking about it. There were some very short range shots where either I didn’t let up on the trigger enough to get a reset or I was cycling the trigger faster than the gun was cycling the slide. I’ll have to do some tests to find out what is going on with that. And for all except the stage with the 50 yard targets I got good hits. My speed improved without problems with my accuracy.

8.45 second El Presidente’s are still slower than they used to be. I’m pretty sure I was doing them in the mid to high sevens years ago. More practice is needed. The transitions need work. I know this because of this. I should be able to remove at least a tenth of a second. I would then get down into the low 8’s for El Presidentes.

I’m going to the range tomorrow and doing a bunch of transition work with the .22. I’ll do another El Presidente test on Thursday.