The person I have known longer than any one else died New Years Eve.

From the Lewiston Morning Tribune: 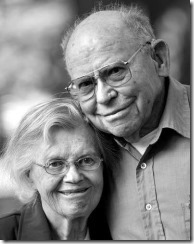 Lowell Huffman died of cancer on Wednesday, Dec. 31, 2014, at his home near Cavendish, surrounded by family members.

James Lowell Huffman was born to Cecil and Sadie Huffman on Aug. 13, 1923, in Cecil’s parent’s home in Arlington, Calif. He went by his middle name of Lowell all his life. Lowell’s mother died of tuberculosis when he was only 22 months old. Cecil later married Ollie Pitcher, who helped raise Lowell. Lowell grew up during the Great Depression living on a farm near Cavendish. In addition to his father and stepmother, Lowell’s uncle Walt, aunt Pet and three children, Doyle, Darrell and Mardelle, lived in the same home and shared many adventures with Lowell.

He attended first through eighth grades at the South Teakean School and graduated from Orofino High School in 1941. Lowell attended the University of Idaho where he studied agriculture for two semesters. The family sold the farm and moved to California in 1945, where Lowell had various jobs including working as an appliance repairman.

His cousin Mardelle introduced Lowell to Ellen King in July 1953. Lowell and Ellen were married Feb. 14, 1954. With help from Doyle, the couple purchased their own farm in the Cavendish area in 1959 and slowly built it up over many years, adding land, buildings, a grain storage facility and much more.

Lowell and Ellen built a new house over a period of several years, moving into their new home in 1969. They had three children – Joe, Doug and Gary.

Lowell was a member of the Evergreen Grange Hall from 1939 until it was disbanded many years later. He served on the North Idaho Foundation Seed Association for several years in the 1980s and 1990s.

His greatest passion was farming. Lowell enjoyed owning and operating caterpillar tractors while raising wheat, barley, peas and lentils on the farm. Construction of new buildings, clearing new land and making other improvements on the farm were things Lowell always enjoyed.

When he wasn’t farming, Lowell enjoyed gardening and telling stories of his younger years.

Lowell was preceded in death by his wife; and grandson Brad Huffman.

There will be a celebration of life from 1 to 4 p.m. Jan. 10, at the home of Doug and Julie Huffman.

Pine Hills Funeral Home is in charge of arrangements.

My family moved to a different home in September of 1959. At last we owned property, but the house was a run down shack with a leaky roof and no insulation. My parents started work on a new house in about 1963. Doing nearly all the work themselves, with some help from my brothers, myself and a few neighbors, we didn’t move into the house until April 20, 1969. My mother was 12 days past the midpoint of her life on the day we moved into our new home. My father was 2 days short of the midpoint of his life on that day. 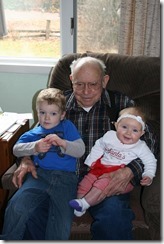 2 years and 2 days ago my Grandma Huffman passed away. Shortly after that my Grandpa Huffman found out he had cancer. This morning he joined my Grandma and passed away at the age of 91. He was a very hard-working man. When I was a teenager, I didn’t realize how unusual it was for a man in his mid 70’s to spend day after day working in the fields during harvest. He was very dedicated to farming. During the last 2 years he surprised everyone with his strength undergoing surgeries, overcoming a MRSA infection in his lungs, and being unable to eat for most of the month of December. I will always remember him as hard-working, dedicated, and strong and am grateful for his example. This picture was taken at Thanksgiving.

For some reason one of the thoughts I sort of perseverated on the day after Dad died was a conversation I had with him which probably was in 1969 near the time of the first manned moon landing and some time after watching 2001: A Space Odyssey. We speculated that by the year 2000 “ordinary people” would be going to the moon and living there*. Dad said that I probably would be around for that but that he wouldn’t. I asked why and he said that he wouldn’t live that long. His father had died by that age and he didn’t expect to live any longer than that. It turned out that had he lived another 13 hours he would have made it into 2015.

On January 15, 1986 I sent my application to NASA for a position as Mission Specialist on the Space Shuttle. 13 days later Challenger blew up shortly after launch. NASA sent me a letter a month or two later saying hiring for those positions was halted until further notice. By the time they were hiring again my situation had changed and I didn’t apply again. And at this point I give us equal odds to enter a new dark age as having a lunar colony during my lifetime. The odds of me setting foot on the moon are asymptotically close to zero.

Here are a couple of my favorite pictures of Dad: 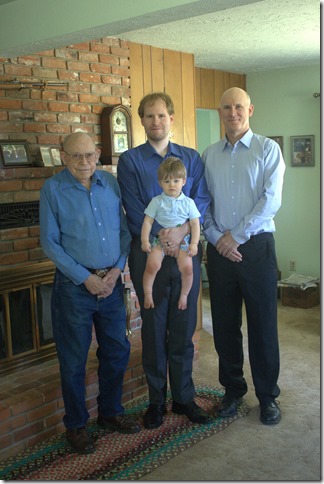 Four generations of Huffman’s; Lowell, James, Bryce, and Joe in the house Dad built.
Photo by daughter Xenia on July 11, 2014. 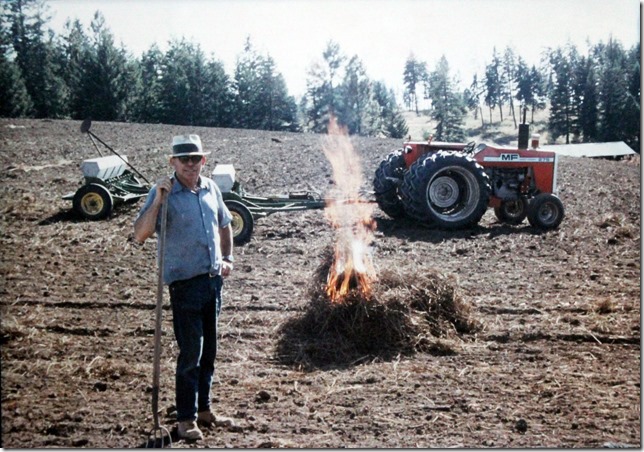 Dad on the farm.
Photo by me which probably was taken in the early or mid 1980s.

Comments are intentionally closed. Having a conversation about the death of a close friend or relative is uncomfortable to me.

* Both Tam and Roberta recently made posts about things that didn’t happen on the imagined schedule as well. These may have actually triggered my thoughts on the subject.