I have had numerous people tell me I look like Patrick Stewart when he played Captain Picard on Star Trek: The Next Generation. Barb strongly suggested I get a Picard costume for the Halloween party last Saturday night. She dressed as “a generic alien woman”. She was correct to make the suggestion: 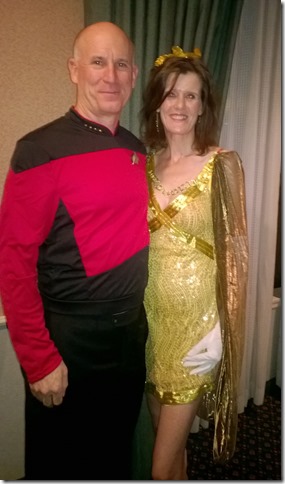 The number of complements and favorable comments I got were uncountable. They ranged from numerous guys merely saying, “Captain” as they walked past and multiple requests to beam us to some other location to, “I just wanted to say you totally rock in the Picard costume.” I even had “Bettie Page” sit on my lap for a while (she also sat on Barb’s lap so it might not have been entirely the costume).