Barb L. was spending the day with her kids doing a bunch of fun stuff so I could have just stayed in the clock tower and cleaned my guns or washed laundry. But no. I convinced Ry we should get up way too early on a Sunday morning and do something more interesting. We went to a part of town that I had only been to a couple of times. I’m not sure Ry had ever been there. And every time I had been there I heard gunfire. Are you getting the picture?

The morning was interesting but uneventful. Then late in the afternoon things got cranked up several notches as the gunfire became more frequent.

I was rather busy when things got exciting and didn’t have time to take any pictures until afterward. Still, they should give you a clue: 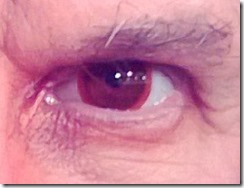 One of the more interesting things to me is that all that color is in the contact lens, not my eye. Here is what the contact lens looked like after I put them in the cleaning case:

My eyes look entirely normal after taking out the lens. I guess that is a good thing. Except those were brand new contacts this morning. They were supposed to last for a month and it looks like even after an hour in a hydrogen peroxide solution the color is staying.

I don’t remember how many tourniquets were applied to my arm but I do know that when Laurie put hers on the bleeding didn’t stop and she kept tightening it. I think the buckle tipped over and as she was cranking on it my skin got pinched. I now have a several bruises that are going to last for a week or more.

Another thing that was rather interesting to me is that out of 13 students in the class there were three women. The prettiest one chose me as her partner* to do “blood sweeps” on each other of the entire extremities.

We started at 8:00 AM and except for lunch I didn’t leave the West Coast Armory property until about 6:00 PM. Then as soon as I got back to the clock tower had lots of clothes to wash and I spent an inordinate amount of time trying to wash all the fake blood off of my skin. I still have lot of red on my left arm and I suspect my face still has a red tinge to it.

I’m sure I didn’t have as much fun as Barb and the kids did but I think it was worth it. I just hope I never have to put my new skills to a real live test.

*This seems to be a pattern in my life ever since Terri R. (a cheerleader in high school who I had never talked to) chose me as her lab partner in chemistry. I don’t think there were any other girls in that chemistry class and of all the guys in class she chose me. I’m not complaining, but I do think it is odd.

12 thoughts on “A learning experience”