Last Saturday Barb L. and I were at the Boomershoot site to “go on a daffodil rescue mission”. As I mentioned a few weeks ago there are some daffodils near the shooting line that get abused pretty badly by the fireballs.

We figured it would only take an hour or two of our time and we’d be done with the project. We dug up about a half dozen clumps of the wilted daffodils and got a five gallon bucket full of bulbs.

To get so many bulbs from so few flowers was surprising to us. Then we started digging holes in the front of the shooting berm. After we had dug about 10 holes we knew this was going to take a LOT longer than an hour or two. After about three hours we started on “Plan B” which was to just dig a ditch in front of the shooting berm to dump the bulbs into so they survive another year and we could move them again when we feel up to it. We made the length of the ditch match the width of the berm we put daffodils in. This was about 60 feet which is only about one third of the width of the berm.

After about 4.5 hours we had all the bulbs back in the ground, fertilized, and watered.

We then went to look at some luxury accommodations my brother Doug offered us for the night:

We declined this time. It was too upscale for our tastes.

We went back to Boomershoot Mecca and made our bed under the stars and the super moon without a tent so we could see the sky better: 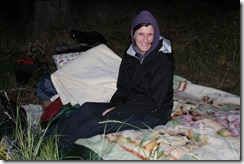 To the northwest we could see a beautiful sunset (at 9:38 PM) (see also this sunset picture taken a few minutes earlier from a different location): 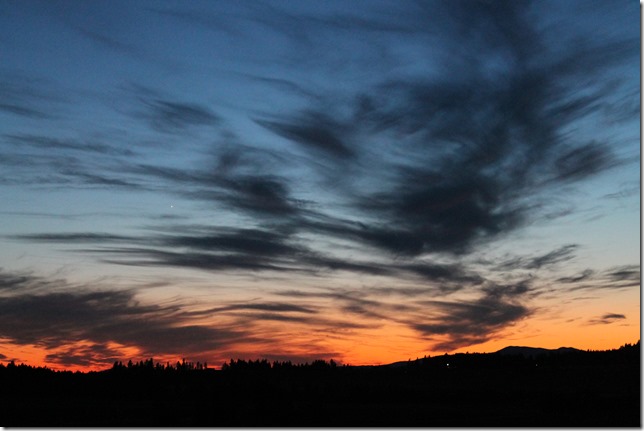 To the southeast we could see the super moon: 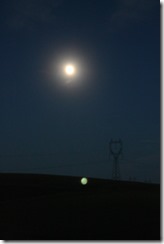 The glowing sphere in the field is just a friendly UFO* which was visiting.

I got better pictures of the super moon earlier in the evening when we visited the Big Eddy Marina on Dworshak Lake: 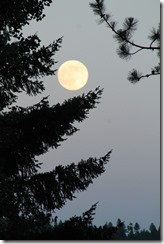 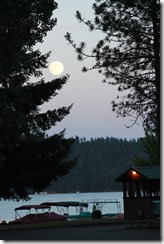 The next morning what I believe to be a Western Meadow Lark sang several songs to us. I recorded some of them and will probably make a post about that someday.

*Actually it was an internal reflection in the camera lens.

4 thoughts on “Daffodils, Boomershoot, and the super moon”