In December I noticed there was a small amount of snow dusting a table in the back end of the shipping container (aka Boomershoot Mecca) we use for Boomershoot target manufacturing. It had come in through a vent in the ceiling.

The vent is to keep it from getting too hot in the summer time. If the ammonium nitrate gets too hot it will undergo a phase change and change from prills to dust. We require prills for easy detonation.

I figured plugging the vent for the winter shouldn’t be a problem. So I plugged it and didn’t give it a second thought.

I didn’t count on a leak in the roof at the opposite end of the shipping container. 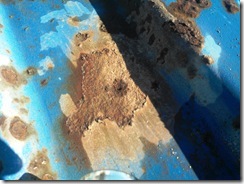 Even if I had imagined the leak I wouldn’t have thought it through.

What happened was the shipping container got a fair amount of water on the floor near the door. The shipping container gets pretty warm (maybe a 15 F increase above ambient on a windless sunny day) inside. This drove a lot of moisture into the air. The air probably stayed in the 80% to 90% relative humidity because there was no venting with the cool dry air from the outside. When the sun went down the interior temperature dropped and the air became supersaturated with water. It condensed on essentially everything. Not good.

I had thought things through enough when placing the container that I had about four inches of drop between the back end and the door. This meant the water drained toward the door rather than back to the cardboard target boxes and the chemicals. It destroyed one cardboard box that had stuff that was essentially immune to moisture like tie-wraps, wires, and bungee cords. But because of the lack of venting the water was migrating to all interior surfaces as the temperature cycled. All because I had not thought through the consequences of not having a vent in the winter simultaneous with a roof leak.

I think I caught it soon enough that it didn’t do any serious damage. One mixer was acting strange but I think I can fix it.

I fixed the roof leak and removed the plug from the vent. Then I put a tarp over the “drop zone” for the snow that might blow in through the vent.

I’ll inspect again when Barb L. and I go back for a visit later this month.