Late last month I went to a USPSA match in Renton. I expected I would be in the situation of not knowing anyone there. And even if I did recognize a face or two I figured the odds of shooting in the same squad as them would be rather low. I was extremely pleased to see Anette and Charles unpacking their gear from their vehicle as I parked. As I was signing up a little later I saw Shelley Rae! We all ended up shooting in the same squad. Also a pleasure was that Lisa Munson was in our squad as well. I didn’t offer her any shooting advice this time.

It has been several years since I shot at Renton and looking at the first stage we shot it all came back to me. These guys design some tough stages! I racked up 190 points in penalties. Most of those were for misses. In one stage I couldn’t find two targets. In another stage I shot 51 points but got 50 points in penalties! In another stage I thought I shot it really well then found out that I had completely overlooked a fault line and shot two targets while faulting. I hadn’t even seen the fault line in the walk-through. The targets weren’t that hard to get but I had done it with a foot completely over the line and got 40 points in penalties. I did manage to come in 6th place in one stage but that was not enough to compensate for all my errors on the other stages. And even on that stage I made a mistake but it only cost me about one second to correct it.

In Limited class I came in 19th out of 30 shooters. That was very disappointing. I need to slow down for complicated stages.

It could have been worse. The first shooter in our squad disqualified himself by breaking the 180 on the first stage within about three seconds of the buzzer going off. 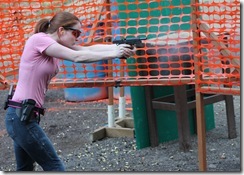 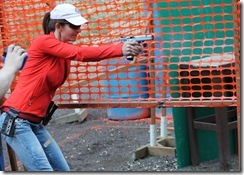 Shelley Rae and Anette correctly shooting the targets I shot with one foot over the fault line.

Charles is taking his first step toward a new shooting position.

Examine the following pictures of Lisa Munson carefully. These pictures were taken as fast as my camera would take them in full auto mode. 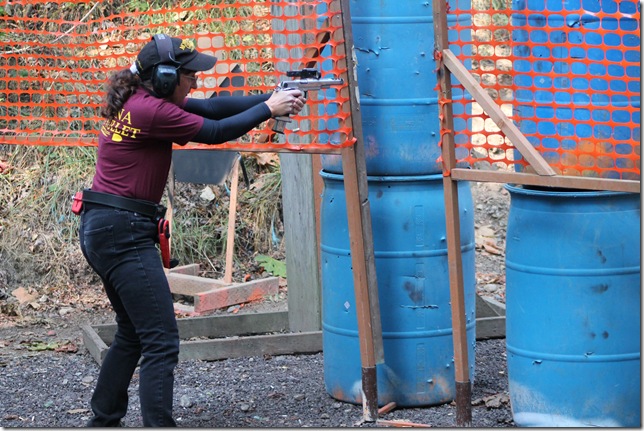 Notice the piece of brass falling just below her hands. 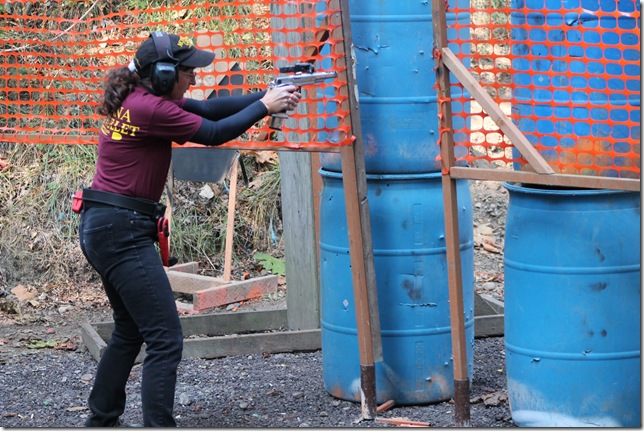 In this picture another piece of brass has just been ejected and is between her slide and sight. Her arms have started to bend and her right leg has started to move. 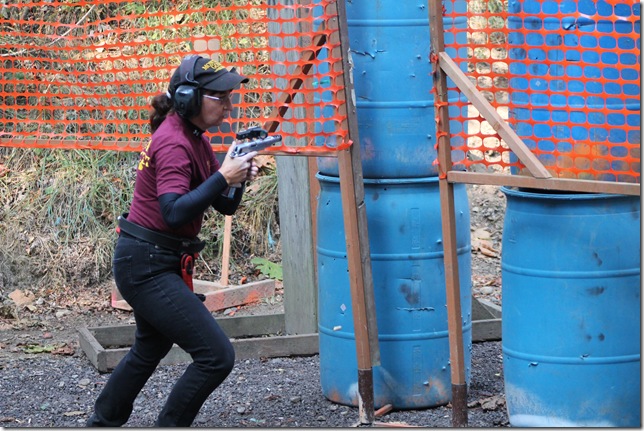 In this picture the same piece of brass that was just ejected has fallen to about 1/3 up from the bottom barrel on the left, she has her finger off the trigger, and is well into her movement to the next shooting position.

I wish I could shoot and move like a girl.