I don’t know who said it first but the phrase “Once is happenstance, twice is coincidence, three times is enemy action” appears to be very popular. I’m sure that test provides accurate results in the vast majority of circumstances. But consider the following.

On our fifth year wedding anniversary we were broke. We had just barely qualified for the loan on our first home with both Barb and I working. We didn’t tell them that in three months Barb would quit her job to go enter physical therapy school. After two plus years (including her non paid “affiliations” with various medical facilities) of Barb being in school we didn’t have any money plus she was busy finishing things up. We didn’t have the time or the money to do anything special for that anniversary.

On our ten year anniversary daughter Kim was just one month old and we thought we could take her to a movie with us. She should sleep in the dark, right? Wrong. We only didn’t get to see more than 30 minutes of it before Kim made it very clear that she needed the attention and not the movie.

On our fifteenth anniversary Symantec had just purchased Zortech (who I worked for). They had a big meeting in their Boston office that everyone had to attend. Barb celebrated with her mom and the kids at Pizza Hut in Sandpoint Idaho. I “celebrated” with Symantec who told us how badly we were going to get screwed over (the person who received several million dollars in the purchase didn’t see what the problem was, those of us who had no job and found out they weren’t going to honor our contracts were rather pissed).

On our twenty anniversary we had a nice vacation planned in California and along the Oregon coast with Barb’s sister Susan. On our actually anniversary day we were supposed to leave the kids with Susan and Bob while we went off by ourselves for the evening. On the way from Idaho to California the van broke down in a little town in Oregon. We had to leave it there and we continued on with a rental that was too small for our family of five plus all the luggage for two weeks. On the actual day of our anniversary as we were traveling up the coast of Oregon I drove a total of twelve hours to take the rental car back and return with our repaired van. Barb spent the day with five kids and sister Susan at a motel. I got back to the motel late at night and very tired.

On our twenty fifth anniversary I was unemployed during the dot com bust of 2001. At that time we were taking turns choosing and making all the arrangements for our anniversary. With money tight we couldn’t go someplace far away and exotic like Bob and Sue who went to Hawaii or Barb’s brother Dow and his wife Katie who went to Ireland for their anniversary. I found a motel near Lake Coeur d’Alene which was about a 90 minute drive from our home in Moscow Idaho. It wasn’t the same name but it was in about the right spot for the same place we had spent our honeymoon. They had recently remodeled and their rooms had different themes. I chose the “Hawaiian Room”. It turned out it was the same motel. Our room had plastic vines, “jungle” wall paper, funny carpet, and a hot tub decorated to look sort of like a pool in the middle of a jungle. Barb still laughs about that room.

On our thirtieth anniversary we went to Missouri. Barb mostly did genealogy stuff. We celebrated five days early with Dave and his family with a crab dinner and fireworks. The day of our anniversary I was traveling back to the Seattle area to go to work the next day while Barb stayed in Moscow to work. Actually, that was a pretty fair outcome. Perhaps we had broken the pattern!

Our thirty fifth anniversary was today. We planned to go to Mount. St. Helens for the day, spend the night in a nice motel and do lots of hiking. Yesterday morning as Barb was walking to the bus stop with me she stepped on a rock, twisted her ankle we both heard a loud, “Pop”. She limped back to the Clock Tower by herself as I went on to work. Today instead of going hiking we spent it in Emergency Room at the hospital she worked at 20+ years ago. She has a small fracture of her fibula: 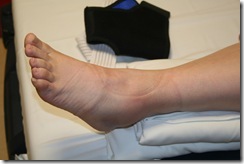 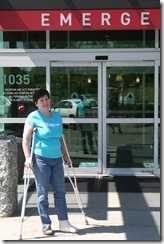 According to the rule it must be enemy action or a conspiracy of some sort. Barb says she is afraid of what might happen on our fortieth. I asked if that meant she wanted a divorce.

8 thoughts on “It must be a conspiracy”