On Saturday Barb and I spent the day with our kids. Our daughter Xenia currently lives in Lakewood Washington.

On November 29, 2009 Lakewood had four police officers murdered in a coffee shop while they were writing their reports. This is believed to be the most deadly attack on law enforcement in the state of Washington.

While spending time with our daughters we visited the site of the event and I took some pictures. 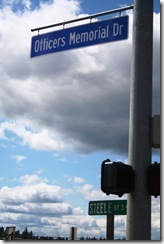 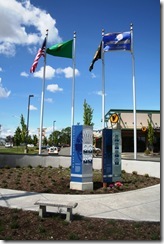 There is a memorial honoring the slain officers. 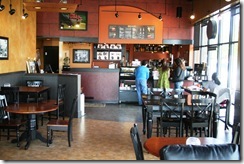 On the morning of Sunday, November 29, 2009, the four officers were working on their laptop computers prior to the start of their shift inside a Forza Coffee Company coffee shop in nearby Parkland, adjacent to McChord Air Force Base. All four were in full uniform, armed, and wearing bulletproof vests. At approximately 8:15 a.m. Maurice Clemmons entered the coffee shop, approached the counter, turned around, and opened fire on the four seated officers with a semi-automatic handgun. Sgt. Mark Renniger and Officer Tina Griswold were killed as they sat in their chairs. Officer Ronald Owens was killed as he stood up and attempted to draw his weapon. Officer Greg Richards managed to get into a struggle with Clemmons and fire his own weapon, wounding Clemmons, before being shot and killed. Clemmons was then seen getting into a vehicle which fled the scene. Neither the two coffee shop employees nor the other customers in the store were hurt, and no money was taken from the cash register. Investigators say the murder was a targeted attack against police officers in general; none of the four officers was individually targeted and robbery was ruled out as a motive.

In the interior picture above Barb and the girls are standing at the counter which Clemmons approached. I asked the baristas where the police officers were sitting but they did not know.

I created an USPSA stage to partially recreate the event. As one of the props for the stage I have a coffee cup from the store. The Lewiston Pistol Club will be shooting the stage Lakewood Massacre (along with Heads or Tails, Six Six Six Six, Steel Cardboard and the classifier Band and Clang) next Sunday. Nonmembers and beginners are welcome to participate.

Update: Based on feedback from more experienced stage designers some of the stages have been slightly modified. Due to details found in a link provided in the comments by ubu52 there were modifications to some of the distances in the Lakewood Massacre stage.

5 thoughts on “Lakewood Massacre as an UPSA stage”