A Boomershooter sent me an email with pictures of a target he wanted to bring to Boomershoot 2011. The intent is to give the shooters something more challenging to shoot at. To be specific he wanted a 1.5” reactive target at 700 yards. The concept was a steel plate on the front with a 1.5 hole drilled in it with a open topped steel box on the back to hold a normal Boomerite target right behind the hole. On top of that box he wanted to put a baggie filled with chalk dust. The explosion should then result in a yellow, red, or blue cloud of chalk dust.

I told him I he could bring it but that it would be destroyed by the first or second use. The explosion would rip the box right off of the back. He almost could not be convinced. Here is some of the conversation:

Joe: “I’m fine with your chalk dust dispenser if you don’t mind picking up the pieces if it spontaneously disassembles.”
Boomershooter: “we got it covered . . 1″ plate with 3/8 open topped box . . i will weld it myself so i don’t have to worry about bill’s welds scattered over the hillside…”
Joe: “My guess is that you will be lucky if the welds hold for two successful hits. Just one is my guess.”
Boomershooter: “i challenge you to be the one to break my welds…”
Joe: “My guess is the .250 chamber will be ripped in half after the first or second detonation. You are welcome to try it as long as everyone is at least 300+ yards away from it.”
Boomershooter: “i’m thinking your 4″ 375 yard targets are going to be a walk in the park for this high tech explosive containment device. i’m sure if you packed it solid you might get it to bulge. but enough explosive to send a colored cloud is what we are looking for…”
Ry: “I admire your faith in your product.”
Boomershooter: “been a certified welder for 35 years . . when i see people shooting bowling balls out of a 1/4″ thick argon bottle over a mile, i figure it can’t be bad with no pressure build up at all . . “
Ry: “My experience was this: I put a little boomerite in a mountain dew bottle (call it a half liter), put the bottle on the round. A couple inches behind it, I put a railroad tie plate on edge. The tie plate landed about 75-80 yards away and was bent into an L shape.”
Boomershooter: “oh well . . you will be getting the explosion test dummy in a couple days . . we will find out after that…”
Joe: “There will be a LOT of pressure build up. I’m expecting pressures beyond the tensile strength of steel. The maximum (of course it is confined instead of partially open) of ANFO is about 1,500,000 PSI. Partially confined it can still reach 1/10 that. We are pretty sure our mixture is more powerful than straight ANFO. If we were to fill the box with Boomerite we could see the total force attempting to separate the tube from the plate reach a peak of (4” x 6” x 100,000 PSI) or 2.4 million pounds.You know your steels and welds better than I do, but my bet it is going at least bulge on the first shot if not get ‘opened up’.”
Boomershooter: “well . . one low tech target is on it’s way . . you scared 223 bill with the 2.4 million pounds of pressure fact, so he elected to add a plate to the back of the tube to keep the bullet from penetrating the back of the tube. give it a try and let us know what you think.

The target arrived earlier this week. It is an impressive target. It weights almost 50 pounds: 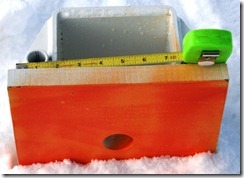 While out blowing up the snow castle we tested the target as well.

We mounted it on some 3/8” rebar. It was intended to have something much larger and we couldn’t tighten up the bolts properly. Hence it hung really crooked: 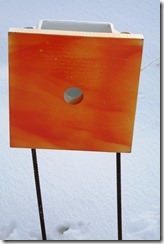 We then put a very small charge of Boomerite in it. Just about 1 cup—200 grams. This was in a zip lock bag that was poked through the hole:

On top of this we put another zip lock bag with 600 grams of chalk dust:

We then got back 100 yards (I figured that with such a small charge and part of it even sticking out the front we would be safe) and shot it with a 50 gr VMAX bullet:

We should have used yellow, red, or orange chalk dust to give better contrast with the snow. But you can tell there is definitely a blue cloud in the air.

But what happened to the chalk dispenser? It wasn’t visible to the naked eye from 100 yards away. We walked up to where it was and found this:

The target had been blow backward until the rebar had bent almost in a U and the target was touching the ground underneath the snow. Notice the rectangular outline on the bottom of the target? That was the bulge from the Boomerite containment box. Do you remember he said, “i’m sure if you packed it solid you might get it to bulge”? This was FAR from packed solid.

Now let’s look at the sides of the containment box: 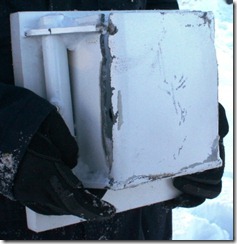 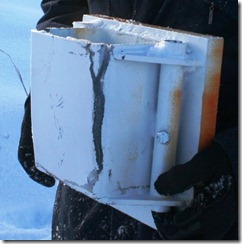 20 thoughts on “The awesome power of Boomerite”