Well, duh!  You dry out your guns, of course.  If they stay wet, all kinds of corrosion can happen, which is bad.  The Remington 700 at the top has already been disassembled, dried and reassembled.  The Daewoo pistol and the Colt rife are still airing out. 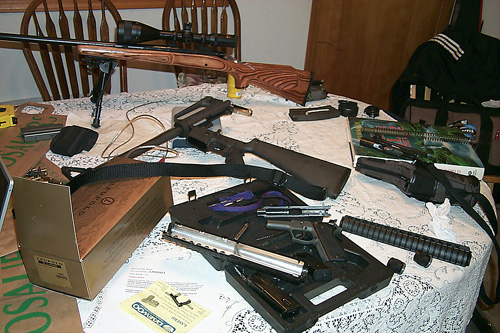 I took my nephew, Ben, into the Idaho mountains to try some “long range” shooting on Sunday.  After 4-wheeling it through several miles of snow, we found a nice place to shoot.  Ben had never fired at anying more than 100 yards distant, and had only fired pistols and carbines. Shooting a sub two-inch group on the first try at 200 meters was something he was pretty sure he couldn’t manage.  He did that much easily, shivering in the rain, firing over the hood of my pickup using the Remington with its “deep space telescope” and heavy barrel.  Ben did some 25 yard work with the pistol and I worked out a preliminary zero on the Colt AR-15 HBAR’s new tritium sights at 25, 200 and 300 meters.  Ben made some comment about being “all wet and cold, and stuff” but I’m not sure what point he was trying to make.  It is December and we’re in the mountains, so?  By then it was getting too dark to shoot so we had to pack up.  There never seems to be enough time in the day.