This is the gun (with part of the serial number obscured) I have been shooting: 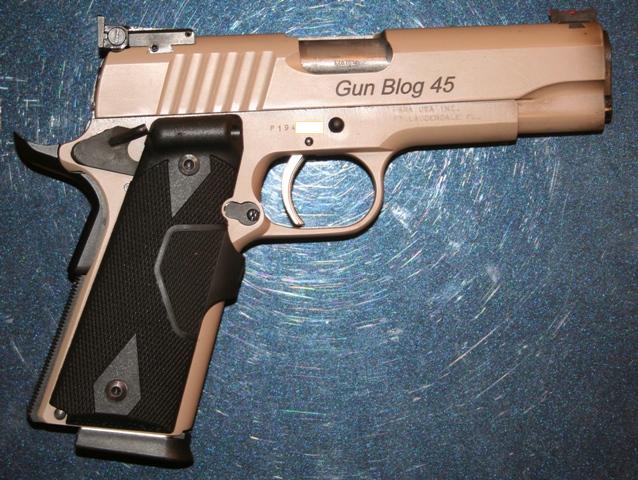 Custom guns just for us knuckle dragging gun bloggers! How cool is that?

I had some problems yesterday and finally figured out what was going on (with a simpler repro of the problem by JR). If the gun cycles, you let up on the trigger to the first click, squeeze (it will hit a hard stop without firing), then let up until the next click, then pull the gun will lock up. You have to manually cycle the slide (roughly the equivalent to a computer reboot) to recover. I mentioned this to Kerby, the Para USA guy, and he said, “Yes. It will do that. Don’t do that. After the gun cycles move you finger until the nail touches the front of the trigger guard then do your pull.” He went on to explain that this is because I’ve been shooting single action guns for a long time. Others that shoot double action or Glock type actions before using a Light Double Action (which this is) don’t have this problem.

At Microsoft we call a bug that is easily reached and causes the program to crash a Priority 0 bug. Priority 0 bugs must be fixed before the product is shipped. Telling the customer, “Don’t do that” isn’t really an option for a released product.

Yesterday I had many failures to feed as well. After oiling the gun this morning those problems went away until very late in the day when the gun got dirty again. And after adapting my shooting technique to avoid the system lock up (and the required reboot) I did pretty well. On the last big “stage” at the end of the day with shooting on the move, shooting movers, and plates racks I had the best run of anyone (possibly even Todd who fumbled some reloads and had other problems) until Caleb shot the stage with a borrowed gun that had 18 round magazines. The rest of us used eight round magazines and I required five magazines to complete the stage.

At the end of the day several of us, including me, were able to hit the eight (?) inch plates at 35 yards half the time or better.

I have to conclude the gun works well as long as you don’t run into that one bug.

Draw your own conclusions as to whether the gun (your version would look like this) is for you.