When Kim was in the Kindergarten we were living in Sandpoint, Idaho. She would take her backpack with ladybug marking on it to school to carry her books and stuff. There was this older boy, a Fourth grader, that made fun of her about the ladybug backpack. The next year we moved to Moscow and Kim didn’t have to deal with him anymore.

Kim graduated from Moscow High School and a year or so later moved to Coeur d’Alene Idaho. Shortly after arriving she was introduced to Caleb by a friend of hers. They talked and talked and discovered they both went to grade school at the same time in Sandpoint. They figured out that it was Caleb who teased Kim about her ladybug backpack. Kim and Caleb were married on Saturday.

For one of our wedding presents we gave them a set of a ladybug suitcase, a ladybug backpack, and a small ladybug backpack. Before the boat upon which the wedding ceremony took place left the dock a ladybug landed near one of the bouquets. I got a picture of it before it flew away: 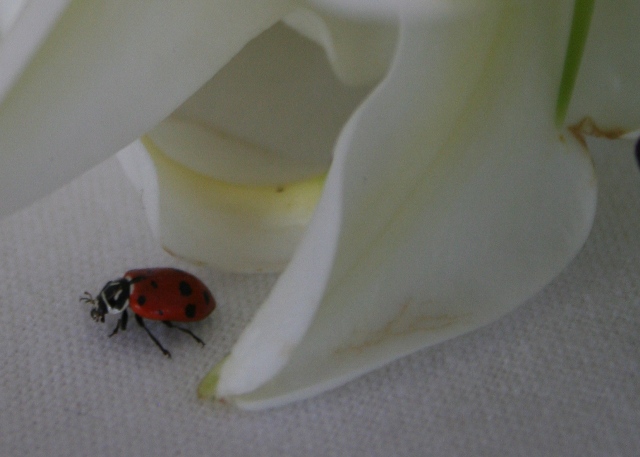 I’ll be posting some more pictures from the wedding soon. Watch for more ladybug pictures.