Another womans says she just couldn’t control herself and had to have sex in public: 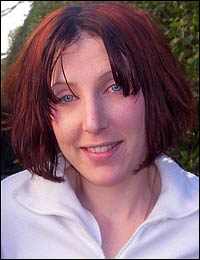 RANDY Alana May was nabbed having sex in public by police THREE times in 30 MINUTES, a court heard yesterday.

Two of the romps were at a floodlit abbey in the middle of a town. The third was on land also owned by the church.

Officers first saw Alana, 25, with her pants down with a semi-naked man outside Selby Abbey, North Yorks. They ticked her off and told her to go home.

But they returned 15 minutes later and discovered Alana performing a sex act on the man against the 11th century abbey’s walls.

She was again told to go home. But just 15 minutes after that the pair were spotted having sex in church parkland.

Alana and the romeo were arrested. She said of the romps: “I couldn’t wait until I got home.”

She was fined £50 for outraging public decency. Her unnamed lover, who has no previous convictions, got a caution.