Gun-related homicides in Chicago have reached a new high in 2017, surpassing a body count of at least 600 dead human beings.

If you were to stack those bodies one on top of the other, a graphic graph would look something like this, in comparison to the height of Sears Tower: 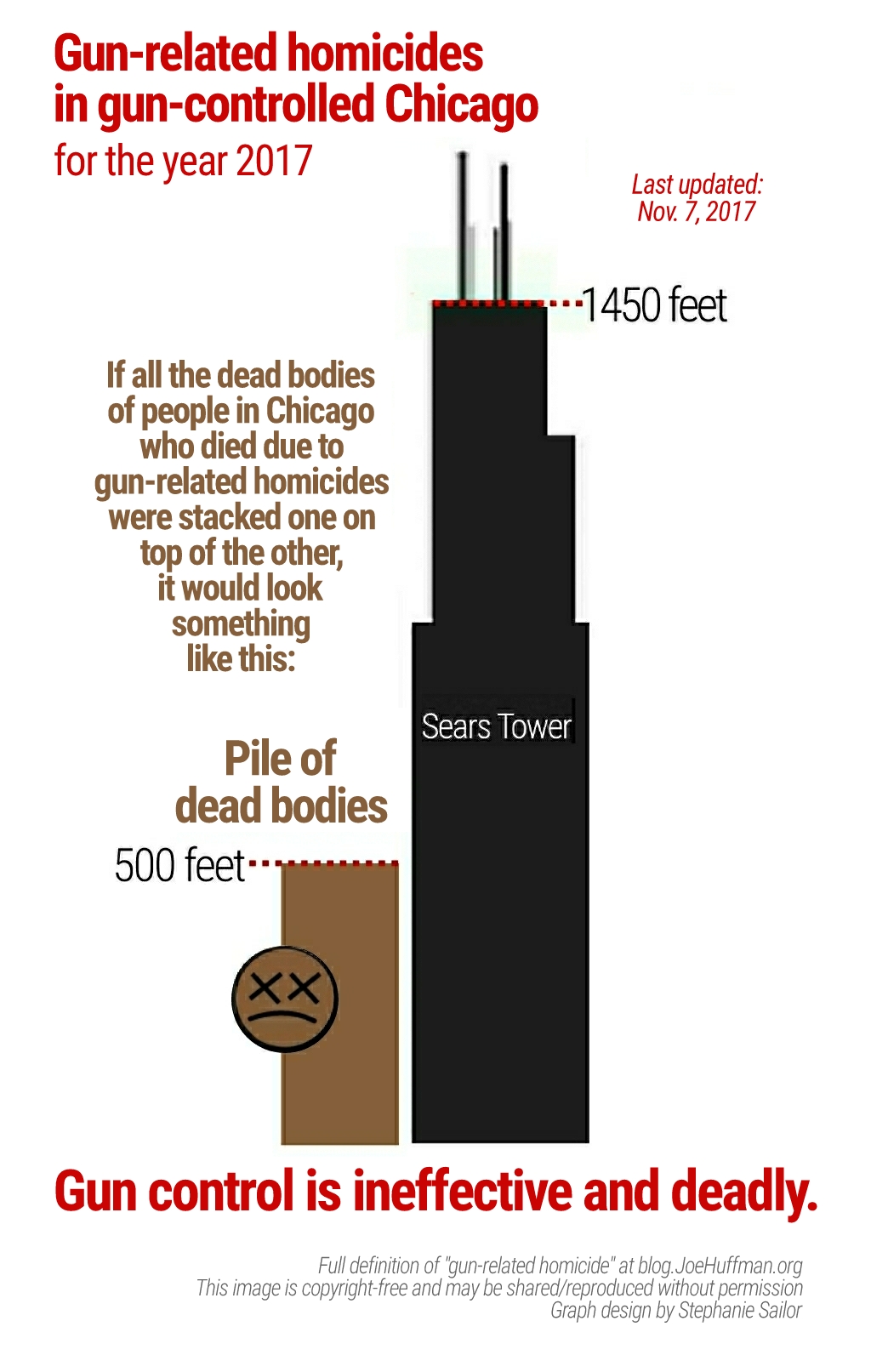 In short, Chicago’s restrictions on firearms ownership are deadly. They do more harm than good, making unarmed people easy prey for gun-bearing thugs who care nothing about gun laws.

“600” is a nice, tidy number, but the bottom line is that Chicago’s a total mess.

I lived in Chi-town from 1996-2001. The gun situation was ugly, to say the least. There, I learned that an unarmed populace is easy prey. The break-ins, shootings, homicides, and lost lives were a brutal reality.

Combining my firsthand experiences with second-hand accounts from friends, my stack of Chiraq stories is seven-feet deep. There’s plenty to share; here are two of many, many, many:

On a bicycle ride home from work one night, someone shot at me. I could not see the shooter (the bullet came from behind), but as the bullet sped past me, it made an unforgettable whizzing sound, like what you might see/hear in war movies. I pedaled mightily, for I was more interested in zipping home, rather then calling the police. I doubt the shooter would’ve pulled the trigger if he thought there was a possibility I was packing heat.

Another Chiraq adventure comes from my then-husband/current frex (friend who’s an ex). Once upon a time, back in our Chicago era (Chicago error?), he walked with his pal to the corner store to fetch some goods. To get to the door, he had to step a few feet around a dead body. Cops had just arrived at the scene; the victim was a Latino man who’d been shot by another fella.

If gun-controllers like Chelsea Handler, Julianne Moore, and other privileged celebrities had to step around a dead body each time a Chicagoan was gunned down, they might reconsider their just-one-more-gun-law-will-fix-gun-tragedies strategy.

Whilst the 2010 McDonald case has opened up things a bit, the remaining gun laws of Chicago are extensive and harsh, making it incredibly difficult for the average law-abiding citizen to purchase a tool of self-defense.

Years ago, Joe Huffman encouraged me to blog about my experiences of living in gun-controlled Chicago. He said my pro-gun/pro-self-defense advocacy had a place in gun rights history, and that people would want to read my writings. I’m not sure if that’s true; today, I’m finally giving it a shot, putting pen to paper, fingers on keyboard.

I know there are scores of current and former pro-gun Chicagoans out there who could publicly share their eyewitness gun tragedy stories. But most won’t, out of fear. Pro-gunners from all walks of life understand the consequences of speaking up for their right to armed self-defense: bigotry, harassment, and persecution from anti-gun folk.

On the most basic level, we’re used to being yelled at by bitter GunCoggers. “Shut up! You’re a liar!” is the kind of language they embrace.

Outspoken gunfolk have had their lives threatened to the point of needing to relocate. Vocal anti-tyrannyists have been ousted from families, fired by employers, tattled on by tattlers, and targeted by anti-gun politicians. Some have experienced the meddling of their medical records. Others are locked in cages, incarcerated. Or worse.

I can relate to all of the above. I know I’m not alone. We’re not alone.

I write not for sympathy or attention. I write to shed light on what gun control looks like at ground zero in Chiraq. Nobody needs to go through any of that.

My investment in the gun rights matter is rooted in the fact that I’m profoundly saddened by the 500-foot tall pile of dead bodies in Chicago, plus scores of others elsewhere. Those were real people, not numbers. Heavy is my heart.

To the current residents of Chicago, do what I did:
Get the hell out of Dodge; dodge with Godspeed out of Chicago.

—–
Definition of “gun-related homicide” is here.