They locked down 5’s school today because they found ammunition on the ground. She’s in kindergarten. Ban guns. Ban all guns. I don’t care. Ban guns.

Andy Wilczak (@heyDrWil)
Tweeted October 23, 2019
[He has since deleted the tweet.

Interesting school response to ammunition. Makes for an easy “denial of service attack”. Some kid wants to be a jerk and they throw a handful of .22 cartridges over the fence into the school yard and the kids have to go into lock down rather than get a recess.

It’s an even more interesting response of Mr. Wilczak. A presence of a few loose rounds of ammunition with no injuries and extremely unlikely potential for injury is enough for him to justify the elimination of 10% of the Bill of Rights. What kind of mental issues, besides Hoplophobia, does he have? One could justify the elimination of the entire Bill of Rights with whatever criteria Wilczak is hallucinating.

Note that in addition noting the crap for brains exhibited by Wilczak you should also never let anyone get away with telling you that no one wants to take your guns.—Joe]

Democrats don’t want to take your guns away. They just want assault weapons banned which nobody needs an assault weapon. Nobody is coming for you guns dude.

Breakingbad @BreakingBad7172
Tweeted on October 4th, 2019
[Ignoring the typos we still have some problems comprehending this. One could presume they mean Democrats don’t want to take all our guns. Just the “assault weapons”. As if this would put us at ease for them to ban the most popular firearm type currently sold.

It’s the logical equivalent of saying, “We aren’t going to take all of your children away from you. Just your firstborn.”

Another hypothesis is that they are unconsciously or deliberately utilizing deflection. I think this is most likely. Such people should be treated as mentally defective and/or evil.—Joe]

His plan does not pass the laugh test, but it beautifully illustrates the magical thinking of gun controllers.

Jacob Sullum
October 2, 2019
Joe Biden Plans To Ban and Register ‘Assault Weapons’ but Won’t Say What They Are
[It also demonstrates how easy it is to lead the useful idiots.

See also the QOTD for yesterday.—Joe]

Democrats are in some sort of crazed frenzy:

If you want to see how extreme the Democrats have gotten on gun control, you just had to listen to a House Judiciary Committee hearing last week.

It is one thing for Democrats such as Beto O’Rourke and Rep. Eric Swalwell (R-CA) [This should be a ‘D’.–Joe] to call for confiscating AR-15s and civilian versions of AK-47s. But in the committee hearing this past Wednesday, the loudest applause came when Democratic witnesses called for bans on all or at least the vast majority of guns.

“I believe that any weapon that can be used to hunt individuals should be banned,” announced Charlottesville Police Chief RaShall M. Brackney in the hearing. Brackney and other witnesses showed just how far the Democratic Party has gone on gun control in only a few years.

Brackney was given a chance by Congressman Greg Steube (R-FL) to correct the record if she might have misspoken, but she only doubled down. Steube pointed out that any firearm could be used to hunt people down, and Brackney responded by repeating the point. She only clarified that police and the military would still be able to have guns.

Ten years ago, if a Democrat witness had suggested banning all guns, one can only imagine that Democratic congressmen would be desperate to disassociate themselves from those comments. But not now. Not one, single Democrat expressed any disapproval.

The only good thing about this is that they have overreached. This will make them vulnerable at the polls and in the courts. If we play our cards right they might even be slapped down harder than in 1994.

But don’t ever let anyone get away with telling you that no one wants to take your guns. These monsters have come out of the closet and shown their true colors for everyone to see.

Of all the places to argue that only the government should be trusted with guns, Beto O’Rourke picked…Kent State University.

Eric Boehm
September 27, 2019
Beto Goes to Kent State, Argues Only the Government Can Be Trusted With Guns
[One might claim Beto pegged the irony meter. More careful reflection should bring to mind that leftist governments regard shooting disarmed civilians with little or no risk a feature, not a bug.—Joe]

They’re unmoved by the mounting heap of slaughtered innocents, by schoolkids missing recess to rehearse being hunted. It’s a sacrifice they’re willing to let other Americans make, because they think democracy’s coming for their power, and they’re right.

Will Wilkinson
September 18, 2019
Why an Assault Weapons Ban Hits Such a Nerve With Many Conservatives
[It’s nice of Wilkinson to admit a few things:

These admissions provide more validation for the point made the other day. They are not after your guns. They are after you.

I look forward to his trial.—Joe]

Apparently @TheBabylonBee is now hard news. I wish them the best in this new phase.

Chris Knox
Tweeted on September 14, 2019
[This was in regards to this Tweet from The Babylon Bee:

It is, of course, a reference to Beto saying that as POTUS, if given the chance, he would demand a “mandatory buyback” of all privately owned AR-15s.

I agree with Knox. The Babylon Bee has been a great satire site and I will miss the humor. But if the skill they have demonstrated continues in their new endeavors they will do well and I also wish them the best.

At a recent shooting match I asked a few people what they would do if Beto got his way. The near universal response was a laugh and them saying something similar to, “What AR-15s? I don’t have any AR-15s.” Also mentioned was something to the effect of a “Tragic boating accident.”—Joe]

The abuse of psychiatry was legendary:

See also Political abuse of psychiatry in the Soviet Union.

Expect little difference if implemented here. What is going to be the default decision of a judge or psychologist? Risk letting a potential mass shooter keep their guns or risk an nonviolent person losing their guns?

You heard me. No apologies. The same reason you don’t need a lion to protect your home, is why you don’t need a rifle that shoots at 3X the speed of sound and splits concrete like ice. It’s an unreasonable risk.

Nate McMurray @Nate_McMurray
Tweeted on June 24, 2019
[McMurray is not some random troll bot. He is running for U.S. Congress.

I look forward to seeing her on trial. 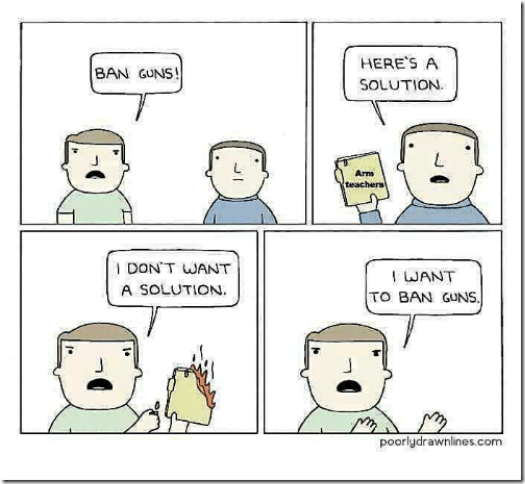 Maybe we’ll just have a confiscation and you won’t have to worry about paying a fine.

[Maybe she will be arrested and prosecuted for violation of 18 USC 242 and she won’t have to worry about an mob of angry gun owners hunting her.—Joe]

We need commonsense gun control measures, like banning semi-automatic weapons, to prevent gun violence incidents like the one that happened at 28th and Jackson in the Central District on Friday night.

For example, community members are advocating for traffic-countering measures like raised flower beds or speed bumps on 21st avenue.

Kshama Sawant
Seattle City Council Member
May 20, 2019
Socialist councilwoman says speed bumps and flower beds will stop drive-by shootings
[When will the majority of people realize, and act on, the fact these people are nuts?

Don’t ever let anyone get away with telling you that no one wants to take your guns.—Joe]

If recent policies have any indication on Democrats’ intentions, the candidates have stopped their consideration for the rights of gun owners. Here are six ways — big and small — that 2020 Democrats plan to strip gun owners of their access to firearms.

Madison Dibble
April 30, 2019
2020 Democrats Find Unity in Targeting the Second Amendment: 6 Ways They Plan to Limit Gun-Owner Rights
[Yeah, I think those are pretty good indicators. Politicians frequently lie but depend on them expanding the power of government.—Joe]

I can think of no reason for a resident of this country to own a handgun or an assault rifle, as these firearms are only used to shoot at other humans. Therefore, the tougher the laws for these types of weapons, the safer we all are.

David Southern
April 30, 2019
LETTER: Tough gun control laws create a safer society
[Even if we were to accept Southern’s faulty claim that the named firearm types are only used to shoot at humans he has remarkably deficient thinking abilities. He apparently cannot envision that some humans need to be shot and need to be shot in a hurry. This is convincing proof he has crap for brains.—Joe]

The entire U.S. military could not disarm 17,000 illiterate fanatics in Afghanistan, which has the square miles of one state, but Eric Swalwell is going to disarm tens of millions of wealthy, educated people who can now make guns with a click of a mouse.  Good luck, Skippy.

This is my favorite: 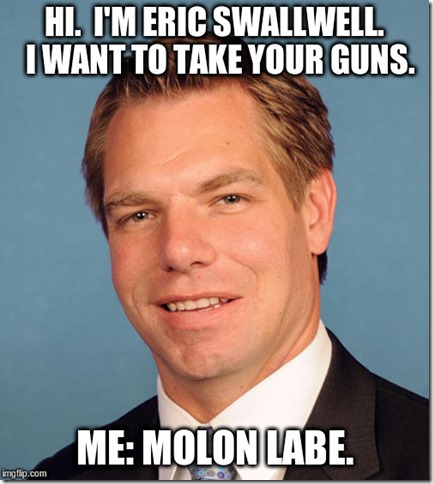 Eric Swalwell @ericswalwell
Tweeted on April 10th, 2019
[Swalwell wants the Democrat nomination for President of the U.S. His tag line is “Go big. Be bold. Do good.”

With his attitude toward gun ownership he’s got the “go big” and “be bold” part covered. But that has eliminated the possibility of “do good”. It’s no use trying to explain in words to him. The courts and voters are going to have to teach him that lesson.

Swalwell also has the nickname of “Nuke ‘em” because he said he would use nukes against U.S. citizens who fought gun confiscation.

The best response I saw was this from T-no @Insomniac0311:

Don’t ever let anyone get away with telling you no one wants to take your guns.—Joe] 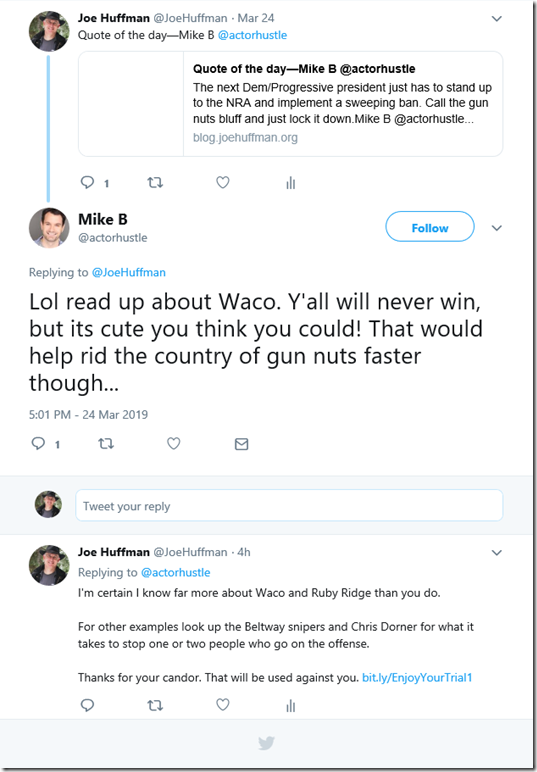 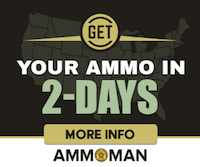