I’m getting too old for this foolishness, but maybe a boomer or two will cheer me up.  That’s always worked in the past…

I was on site last Friday and I have been watching the web cams and the weather forecast. I am strongly recommending you postpone your event. The best-case scenario is that your shooters are laying in mud. Most likely it would be an inch or two of icy water. Access to the target production facility also may involve wading through shin deep mud and carrying nearly 900 pounds of targets 100 yards to the nearest gravel road. Our target production manager will be seven months pregnant at that time so we have our own motivations for postponing the event as well.

They decided they wanted to proceed with the 23rd. Okay, if that’s what you want.

We managed to get vehicle access to the target production facility. As predicted there was icy water in the shooting area and mud in the target area. The weather was better than I expected. It was cloudy but no rain … until about two minutes after the shooting stopped. Icy rain drenched the shooters before they could walk back to their vehicles.

The event was for a promotional advertisement. All the shooters, about 100 of them, were wearing the company t-shirt. I saw one petite woman soaking wet in the t-shirt, shivering, and telling us how awesome that was with a huge smile on her face.

When Kim was 16 years old she had broken up with her boyfriend. She hadn’t smiled in a week. I took her to the local gravel pit to test fireball construction. This is a frame grab from the video as she stood up from detonating the fireball target: 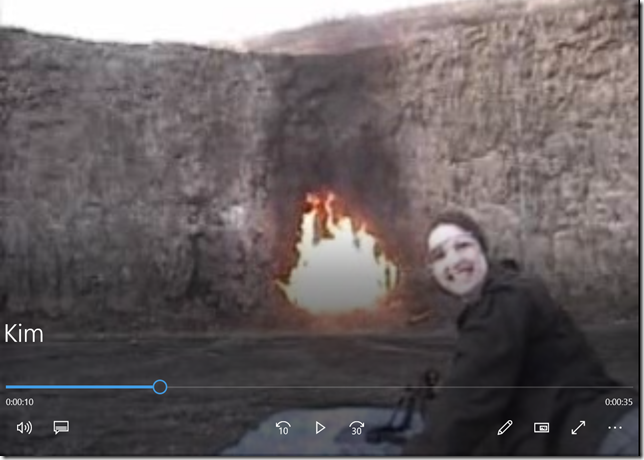 They can’t always express themselves coherently (Cyndi couldn’t even talk) but when a newbie detonates a boomer and they always have a smile on their face.—Joe]

2 thoughts on “Quote of the day—Kim du Toit”