Data companies are starting to sell “extremists scores” to help companies avoid doing business to Trump supporters. What is your score? 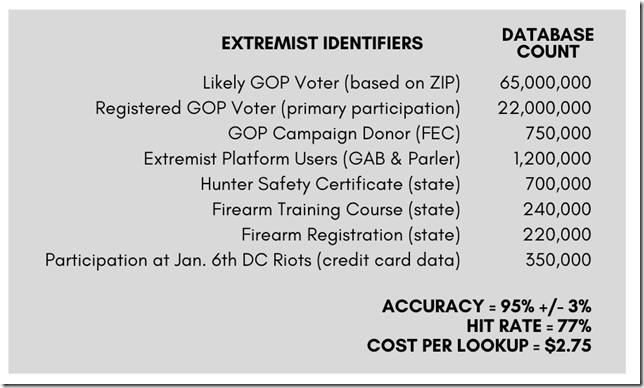 Andrew Torba @a
Posted on Gab February 11, 2021
[Exercise of a specific enumerated right is evidence of being an “extremist”?

“Extremist”? With those type of numbers…

I don’t think that word means what they claim it means. Or, probably more accurately, someone is doing some really heavy duty projection.

As I have pointed out before, historically, the political left progressively tightens the purity tests and eventually eats their own. It is an almost inevitable consequence of their psychology.

This is particularly relevant to current events. For example. Gina Carano was fired by Disney for an “anti-Semitic” post on social media. One of my sources says this was the post:

This is, at least partially, confirmed by Variety and the WSJ.

Variety and the WSJ quote a Lucasfilm spokesperson as saying:

… her social media posts denigrating people based on their cultural and religious identities are abhorrent and unacceptable.”

I see absolutely nothing to indicate she did anything even approaching what she is accused of doing. And, as one person in a private post on Facebook said:

Them firing her kinda proves her point.

18 thoughts on “Quote of the day—Andrew Torba @a”