Long ago and far away (20+ years and 300+ miles) I was just starting to reload rifle rounds. I probably wasn’t using the proper lubrication and I got a 30-06 case stuck in this die:

I concluded it was impossible to get the case out and I went to the local gun shop to see if they had a replacement die I could purchase. The owner of the store, a wise and knowledgeable man, suggested I order a case extraction tool rather than purchase a new die. I did so, but it took far longer for the tool to arrive than I had patience for and I got another die anyway. A neck resizing only die.

When the tool did arrive I was looked at the situation and realized I needed to drill out the primer pocket (drill provided with the tool), tap the resultant hole (tap provided), use a cup like piece of metal with a hole in the “bottom” through which a bolt was screwed into the base of the shell casing, then tighten the bolt to pull the case out of the die. That should work! Except for one problem. The depriming pin and expander ball were inside the case and blocking the drilling and tapping operations. I was unable to remove them from the case up through the top. In fact you can see the broken top of the spindle (is that the correct word for this?) in the picture above from my attempts to unscrew it from the die. I didn’t really need the full length resizing die at the time and left the stuck case in the die.

20+ years later I started to reload 30-06 again and I needed to do full length resizing with some used brass I had purchased a year or so ago. I got out the full length resizing die and discovered the stuck case. Crap. As I shuffled through my die supplies I stumbled across the case removal tool and reevaluated the situation. I really needed to figure out how to get the depriming pin and expander ball out of the case. After way too long I realized something.

In the picture you will see four different knurled sections to the die. The top two are associated with the spindle. I removed these, squirted some case lube into the top of the die, turned the second one upside down so that it didn’t thread itself back into the die main body and tightened it up. It was a hard pull but the expander ball came back up through the case which had been stuck for 20+ years.

I drilled and tapped base of the case and successfully extracted the case with the case extraction tool I had purchased so many years ago. See the case on the left below compared to the normal case in the center: 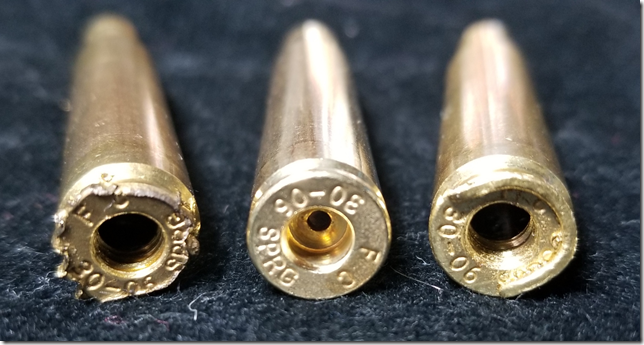 I expressed my joy and cleverness to Barb, reassembled the die, adjusted it, lubed up a bunch of cases and started resizing them. On about the fourth case I stupidly picked up an lubed case sitting on the bench and got it stuck.

This time it only took about 10 minutes, instead of 20+ years, to get the case out. See the case on the right above.

What I found most interesting was that the stuck cases had necks which were stretched a full 0.150 inches. Previously stuck cases on the left and right compared to a normal case in the center: