On Monday Barb and I were headed north from McCall to the Boomershoot site to do a little work on things. Between Grangeville and Kamiah we saw clouds which could have come from a biblical painting: 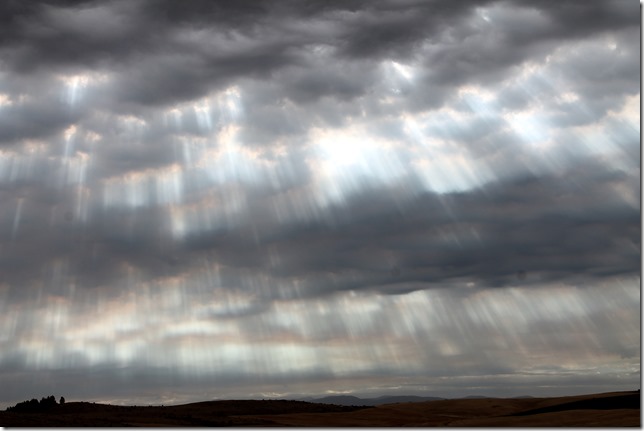 I didn’t think those type of scenes were real. It must be very rare. Another item for strange things in 2020 we told each other. Little did we know this was not the most unusual thing to happen to us on this day.

We arrived at Boomershoot about noon and retrieved the old (I think it’s about 75 years old now) dozer to fix a wet spot in the “road” to the Boomershoot explosive storage facility, the Taj Mahal: It was windy* enough that it was uncomfortable working in the open even down in the draw and next to some trees. But this was our time window to get this done so we persevered and completed it about 3:15.

I drove the cat back up over the hill to return it and Barb drove my car around via the road to pick me up.

I was quite surprised to see a big cloud of smoke. It looked like it was just on the other side of the hill and about to engulf Boomershoot Mecca. This is the reactive target production facility for Boomershoot. I headed the cat straight for Mecca as fast as it could go (about 5 MPH).

The map below will help you understand the previous and following events. Click on it to get a higher resolution image so you can read the annotations: 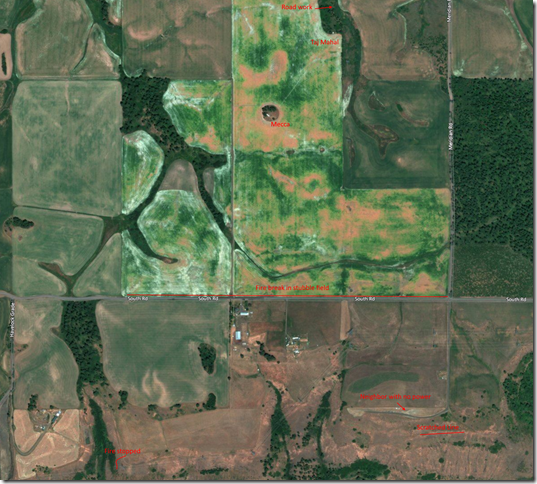 When I got to the top of the hill next to Mecca I could see the fire was actually about a half mile away. I stopped to evaluate and took a few pictures:

I decided I should take the dozer to the nearest house in danger from the fire and see if I could help. This was a neighbor I had never met but neither of us bothered with an introduction when I showed up. He had a wide gravel driveway between his property and the fire.

It didn’t seem that his property was in too much danger. I suggested he turn on the sprinklers and get everything wet before evacuating. He told me the power was out and since his water was supplied by his own well he didn’t have any water. I offered my generator which was back at Mecca. I could radio Barb and we could go get it, probably, before the fire arrived. The guy wasn’t sure he could connect it to the pump. And he had his own generator but no gas. I offered the 10 gallons of gas I had at Mecca. He was indecisive about that too. I asked, “What I can I do to help?” He said, “Maybe you could scratch a line on the old road further down the hill.” Sure, I could try anyway. He opened a gate and I drove the cat down over the hill closer to the fire to create a dirt line between the fire and his property.

The ground was far more rock than dirt and the old cat was just too small to do much more that turn over the small rocks on top. The dry plants were barely moved and still represented fuel to the oncoming fire. I continued for a couple hundred yards and decided I wasn’t really making a difference and the fire was close enough I could feel the heat. I took a few quick pictures and retreated:

I went back to my property on the north side of South Road and used the dozer to make a firebreak at the edge of the stubble field heading west for 3/4 of a mile from Meridian Road. It wasn’t the best tool for the job but it was better than nothing. The blade on the cat tended to slide on top of the soil or dig in too deep, digging up such a mound of dirt that the engine didn’t have enough power to move it. I opted for the scraped stubble. I could get it done quicker and it would significantly slow the fire even if it wouldn’t completely stop it.

Another, much bigger tractor pulling a heavy disc (a type of cultivator which is sometimes called a disc harrow) came up behind me about half way through my pass. This made a wider firebreak and turned the stubble into the ground better than the blade of the cat. I moved to the side and the driver waved as he passed. I didn’t recognize him.

I moved to the north edge of the break created by the disc and made it a little wider as I continued on to the west.

This is what I saw on the other side of the road shortly after the other tractor with the disc passed me:

I considered crossing over the road to get between the homes and the fire. But the fire was producing so much smoke that I didn’t think it would be safe for me. Also, I knew much of this would be the hard rocky soil that my little cat couldn’t do much with. I feared these buildings were lost.

At the west end of the 3/4 mile firebreak I crossed the road and went south to meet the fire in a different stubble field where the fire was smaller and the smoke less heavy.

I crossed the first stubble field with the blade up and going as fast as the cat would travel. I crossed rocky waste land into the second stubble field and found two tractors, both with discs making a firebreak on the south edge of the field. They had it well under control so I parked and watched as the fire approached the worked up soil: The wind was blowing slightly away from me and took the smoke with it.

The two tractors left and I poked at one spot of flame which tried to make a crossing of the firebreak. I then saw that at the west end of the field there was a patch of waste land the tractors with their discs could not do anything with was going to provide fuel for the fire to cross into a brush and tree filled canyon.

I got there just barely in time to literally put out the fire with the blade of the cat. Here is where I blocked it from traveling north:

And this steep hillside is where I stopped it from going west:

There were still a few small flames starting to burn at the west edge of the break I had built. I walked along the edge and put them out with my shoes or a rock I used to scrape or pound at the flames.

This is the view to the west into the canyon:

The fire was making its way into the canyon via a different route from the south but I had slowed it down. There were two helicopters dumping water on the fire and one plane with fire retardant working the fire so maybe I gave them more time to get it stopped in the trees (the fire did not make it to the north over South Road).

As I was about to get back on the cat Barb was able to make contact on the radio. I didn’t see there was much, if anything, more I could do. We arranged to meet back where we picked up the dozer shortly after noon. She picked me up and we headed to our motel room in Orofino.

We went west to the Cavendish Highway where we found a sheriff’s deputy parked next to a Road Closed sign. South road was now closed. I expected the road to Orofino was also closed but we asked just to make sure. The deputy told us it was but we could continue on to the west and go down Hank’s Grade to Lenore and get on Highway 12, then go east again to Orofino.

As we traveled east on Highway 12 we saw one of the helicopters come in for water from the Clearwater river. It was directly across the highway from a large pullout and there were several cars parked there with a crowd of people watching and taking pictures. We joined them: 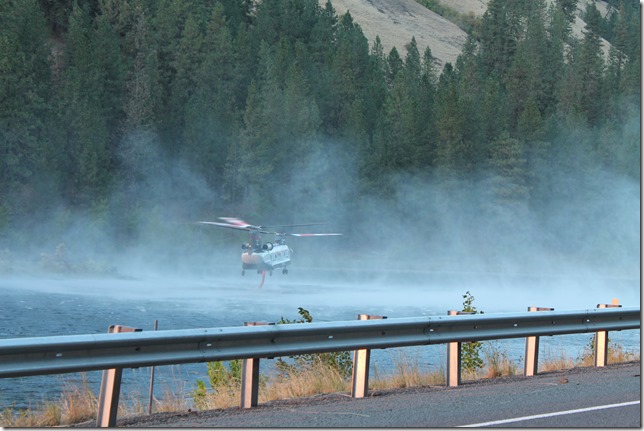 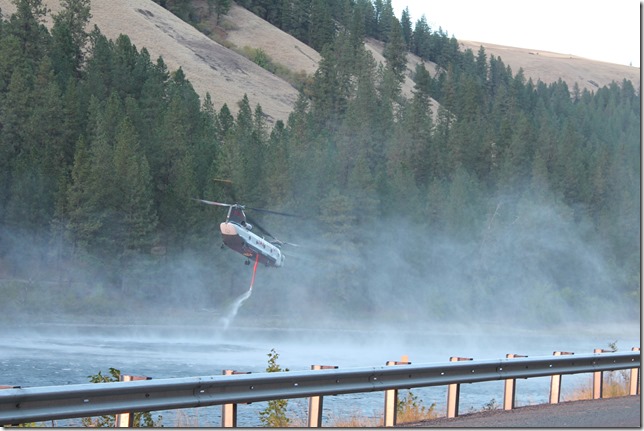 Here is a short video of the smoke as seen by the Boomershoot Live webcam. One second of video is about 2 minutes of real time:

Here is the official incident report on the fire. The fire I was at is called the Clover Fire.

KHQ (Spokane) has this report on the fire.

The buildings to the immediate south of South Road that I was most concerned about survived. Others did not. Clover Fire burned an estimated 1,631 acres, damaged or destroyed 13 residences, 31 outbuildings, 26 vehicles and one Sheriff’s patrol vehicle.

Barb and I went back the next day. Because of the road closures we went way west on Highway 12 to Highway 3 then Julietta, Kendrick, Southwick, and Cavendish to make it back to South Road.

The following pictures are from the driveway of the first neighbor I tried to help:

The line sort of through the middle of this picture was my futile attempt to help in the rocky soil:

In this picture you can see a red streak from left to right behind the buildings belonging to my cousin Alan. This red streak is the fire retardant dropped by the plane

One of the helicopters was still dropping water on the fire on the trees in the canyon I had tried to prevent the fire from reaching: 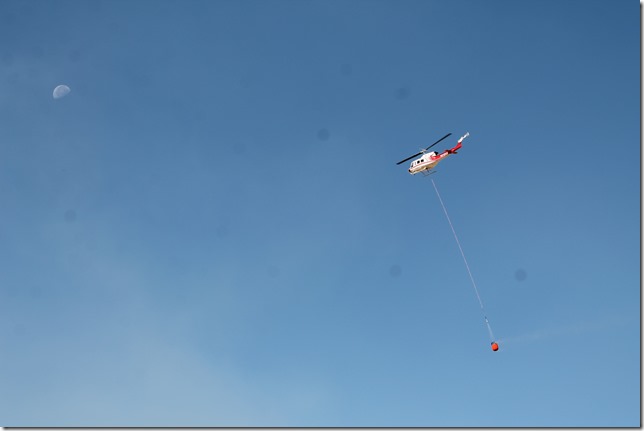 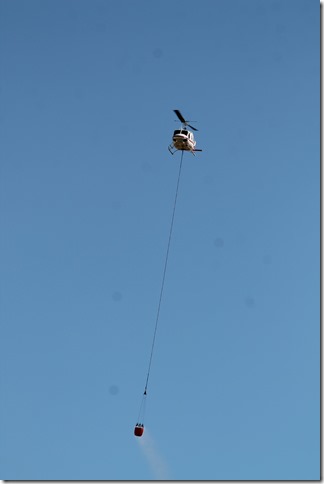 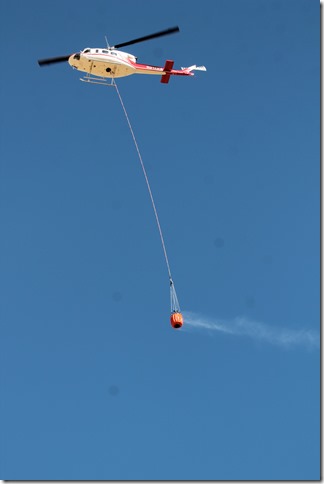 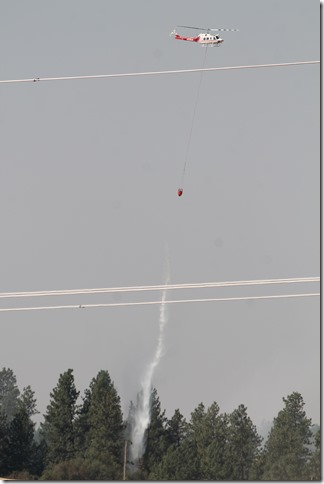 In that last picture the trees and helicopter are about 0.5 miles away with the power lines about 200 yards away.

I timed the chopper. It took 4.5 minutes to make a round trip. I am very impressed with that sortie time.

Daughter Kim texted Barb and I saying a friend had three horses at Frederickson’s place about half way down the hill near the highway. Someone, I’m not sure if it was a neighbor or firefighter, turned them loose. Kim wanted us to keep our eyes open for them. We did not see them but they would have gone away from our location. This evening Kim reported they had been found.

Brother Doug is part of the local volunteer fire department and has stories to tell as well. As Barb and I left to return home yesterday we stopped and chatted with him as he and others watched the helicopter drop water on the trees. It was their job to make sure the fire didn’t get across South Road.

I asked Doug if he knew of any other fire of similar size in the area. Nope. To his knowledge this was the largest fire the community had ever seen.