I had seen good still images and a videos of the second and third terrorists Rittenhouse shot and it was clearly self-defense. But the first guy, shot in the head, I have wondered about all day. Was it a justified shooting?

This video (graphic, disturbing content so I’m not embedding it) adds clarity to all the terrorists he shot. [Update: The YouTube account with the video has been terminated. Try this link instead.]

I no longer have any doubts about the justification for first guy downed. Rittenhouse was being chased by multiple people. They guy leading the charge and about to make contact received a grazing shot to the right side of his skull. He, as the narrator points out, was playing a stupid game chasing a guy with a rifle and collected a stupid prize.

This is not to say that Rittenhouse didn’t make an ill advised, perhaps even illegal, contribution to the situation. He deliberate put himself in a position which increased the odds of something like this happening. If he was on his own street instead of 15 miles from home it would look a lot better for him. And what lead up to him being chased by the first set of people? Did he deliberately provoke a confrontation knowing he could come out on top if they “took the bait”? That is still unanswered.

Similar questions could be asked of the dead and wounded terrorists. I know one of them lived a similar distance away. And perhaps all three. They went there, obviously, looking for a fight. They found more fight they they bargained for.

I would like to suggest both dead terrorists be nominated for Darwin Awards.

And here the image that is going to be a classic for years to come. It’s Peaceful Protestor Terrorist number two hitting Rittenhouse in the head with a skateboard a couple seconds before taking a rifle bullet to the midsection and dying: 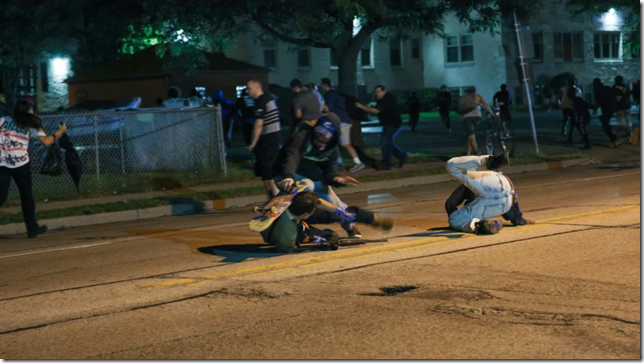 He should get Darwin Award of the year for that maneuverer.