Random thought: Joe, are you and Barb giving any consideration to relocating?

I mentioned this to Barb as we were getting up and received the expected answer, “No.”

That’s a little more strongly worded than the reality and also deserves a bit of an explanation. Barb and I talked about it some as we went on our morning walk and I took a few pictures to help explain. As we walked along I was struck by the alternate reality she and I are living in compared to downtown Seattle only a few miles away. Barb elaborated with, “We are living in bubble.”

In this picture, a short walk from our house, you can see the U.S. flag on the left edge of the image:

Below is an expanded snip of another flag near the car on the right in the image above: 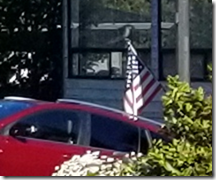 It’s extremely rare to see a U.S. flag in downtown Seattle. Unless, of course, if someone is burning it.

Here is a common view on our walk: 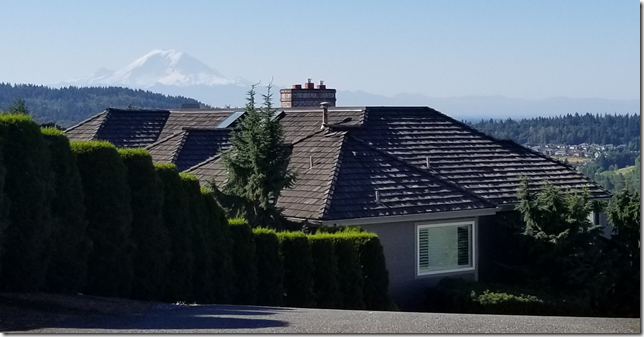 In the distance to the south you see Mount Rainier which is over 50 miles away. The air is frequently that clear. My cell phone camera doesn’t do it justice but you can almost as frequently Mount Baker 80 miles to the north from another location on our walk.

In the picture below you can see Seattle (click to get higher resolution and see the Space Needle) in the distance the night after the most recent “peaceful protests”. I imagine the couple on their deck reading about the riot in the newspaper as if it had happened 1000 miles away instead of 10.

Our reality is much different from downtown Seattle. The streets and air are clean, the neighbors are polite, the police are responsive, the views in all directions with only a short hike are a joy to behold. There is a lot of territory between us and ground zero of the riots. There are thousands of homes and a large lake between us and the terrorists. The roads into our neighborhood are few with lots of cover and concealment along the sides. It is my belief that there will be a lot of warning and a heck of a lot of “vigorous”  resistance to the terrorists migrating out of their turf into ours. And the primary resistance will be supplied by the local police department who has not been shackled like the Seattle Police.Department. When I was shooting matches I frequently had a Bellevue police officer on my squad. The next chance I get I will ask a few questions about how he thinks an attempt at a riot migration to our side of the lake might turn out.

That said, daughter Jaime asked that Barb and I take a look at houses “out in the country” with her and her spouse last Saturday. They live in Bellevue near where the nearly completed light rail from downtown Seattle terminates near Microsoft. She tends a bit toward the neurotic side of normal and her location near easy access from the communist infected downtown Seattle bothers her. She received permission from “all the way up the management chain” at Microsoft to work from home “forever”. Barb and I looked at homes with them for several hours which were an hour drive from her current location. They made an offer on a place with a one acre lot next door to a home with a “Trump 2020” sign in the yard. That might as well be an alternate universe from downtown Seattle.

Also, I have accelerated my plans to buy or build a home in Idaho. A good part of our visit over the 4th of July weekend was to look at three different homes near Boomershoot we expect to be on the market soon. In this neighborhood property seldom gets formally “listed”. It’s almost always via word of mouth that you find out something is for sale or someone is interested in buying. We drove by the homes and told my brothers and sister-in-law that we are interested. We also looked at three different potential sites on my property to build. We chose one and have contacted a potential builder/architect. Then yesterday I completed a tentative floor plan. This would be small “summer home” or bugout location if things get too dangerous or politically intolerable in our current location.

So, to answer Alien’s question in something more than one word and less than a page, we feel pretty safe where we are for now and really like what we have here. We won’t be moving unless there is some pretty drastic changes happening a lot closer to home. However, we and others, are implementing plans to deal with that scenario.

6 thoughts on “Living in a bubble”