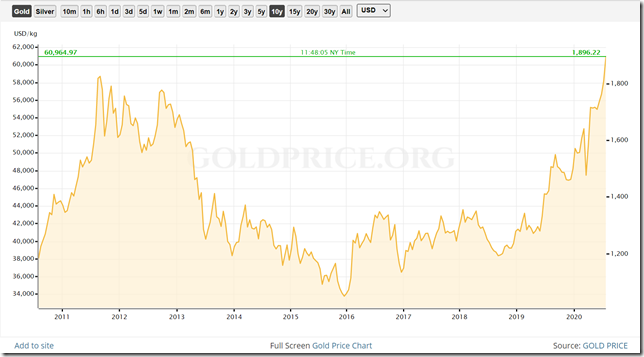 In the mid to late 1990’s gold was selling for $300/ounce. I was making more money than I am now (contracting work for Microsoft with unlimited amounts of overtime allowed at 1.5X base rate) and bought a few ounces. But most of my money went into paying down the house mortgage and putting a new roof on it. And then half of that, which wasn’t very much to begin with, went to my ex-wife in the divorce. I wish I had bought more now. It would be worth a lot more than what the house appreciation was.

Gold surging is generally an indicator of troubling times which certainly describes 2020. But what is interesting now is that vaccine trials are looking pretty good and the economy is doing okay considering the circumstances. But yet, the price of gold continues to climb. I suspect the huge surge in the “printing” of money is a major contributor.

We live in interesting times. This year will be one for the history books.