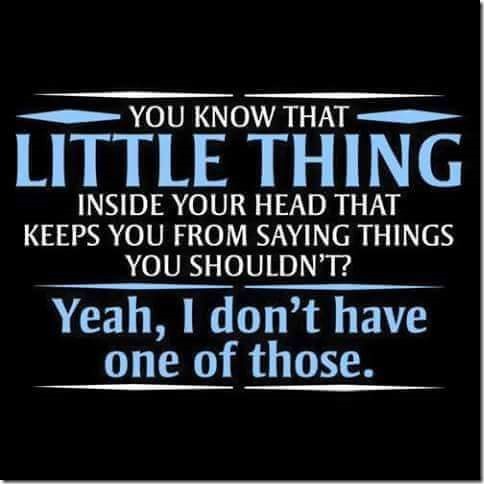 After the previous lightness I decided we needed a gentle transition back to the serious business at hand.

It’s time we stopped “biting our tongue” out of politeness. Hatred, aggression, and criminal violence must no longer be tolerated. It’s time for “that little thing inside your head” to be told, “It’s time to be honest, courageous, and do the right thing rather than just trying to avoid trouble.” We are already in trouble. Extremely serious trouble. We are facing the end of civilization. We are facing budding tyrants who would enslave everyone in a Marxist systems of governments. We know Marxist governments murdered 100’s of millions in the 20th Century.

Our technology is better now than it was during the great 20th Century democides. Our surveillance system of cameras, location tracking, and communication monitoring combined with databases of almost unimaginable scale and detail and artificial intelligence enable an Orwellian dystopian future of tremendous power:

There will be no loyalty, except loyalty to the party, but always there will be the intoxication of power. Always at every moment, there will be the thrill of victory, the sensation of trampling on an enemy who is helpless. If you want a picture of the future, imagine a boot stamping on a human face forever. The moral to be drawn from this dangerous nightmare situation is a simple one. Don’t let it happen. It depends on you.

4 thoughts on “We now return to our regularly scheduled program”