A few weeks ago I received an email from a blog reader in California:

Students would be Son plus Future Daughter-in-law.  He has a shot a gun a few time at the range with me but she never has.  Both now want to conceal carry.  The own no guns.  They need basic training and purchase advice.  Any recommendations for trainers in their area?

I didn’t know anyone in the Olympia area but was ready to research things and recommend someone. I also offered to give them their first lesson if they could travel to my local range. They accepted my offer for some free training and last Friday we took over the training bay at West Coast Armory in Bellevue.

Chris has shot a little more than described with the boy scouts and other random trips to the range. Very little pistol shooting but a fair amount of rifle shooting. So, I started with Marion to get her up mostly up to level.

I put a suppressor on a Ruger Mark III 22/45 Lite and showed her stance, grip, and sight picture. She did dry fire about a dozen times but complained the grip was too small. She was correct. She has large hands for a woman so I switch to an STI Edge for dry fire and then a different .22 pistol for live fire.

I repeated the mantra, “Trigger prep, sight alignment, squeeze, follow through” again and again as she dry fired. I watched the bobble of the muzzle as it happened less and less frequently. After she had many excellent dry fires in a row we went live from 10 feet away. She was tense and said she was nervous. She did just fine.

These are her first six shots ever and the associated smile: 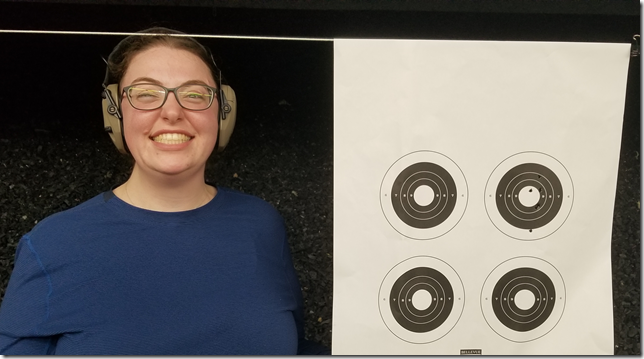 Back to Marion. She had a tendency to have her elbows bent to much and the usual failure to lean forward. But she did well:

Chris was shooting well without much input from me:

I had to correct their grips a few times and encourage Marion to lean forward and straighten her elbows more. Chris had to be reminded several times to keep his finger off the trigger when he brought the gun down. That’s an extremely common problem with experienced shooters who didn’t get fairly disciplined instruction early on.

I switched back and forth between them increasing the difficulty by having them switch between targets for every shot. It was the drill I use for practicing Steel Challenge matches. I encouraged them to shoot as fast as they could while getting all their shots inside the rings. They went through about 150 rounds of .22 dumped into multiple targets. They did great. For a new shooter Marion’s speed was impressive.

I switch to them to unsuppressed:

When I asked Marion if she was okay with the increased noise I got a look that indicated she thought that was an incredible stupid question. Okay. Time to change calibers then.

.40 S&W in the STI Edge with the powder puff loads I worked up for new shooters and shooting steel matches and silhouette targets to simulate self-defense shooting.

They both did great. I put up two targets and had them put two rounds on one target then put two rounds on the other. Again, when asked about recoil and noise Marion’s facial expression told me far more about her tolerance than her verbal response of a couple dismissive words.

With their good shooting I moved them to more difficult targets. Two shots on one target then two on the other:

Again they both did great. Here is Marion’s first set of shots on the partial targets from 10 feet. Zero misses and only three D-zone hits:

After they had finished off the two hundred rounds of the light recoil .40 S&W I brought I switched to 75 rounds or so of Major Power Factor USPSA loads I brought. Never have I had new shooters go through more than a couple magazines of even the low power .40 S&W.

After shooting a magazine of the USPSA loads I again asked Marion about the recoil. Her eyes didn’t roll, but I’m pretty sure that was her irritated with the stupid questions look.

With the higher recoil, my encouragement to shoot as fast as they could get shots on the paper, and some fatigue showing up the shots started getting a little less precise:

It was pretty amazing. I didn’t get out the timer but I’m certain she was doing less than one second splits on both double taps and transitions.

Here is a sample of Chris’s shooting:

Great grouping for the speed at which he was shooting but the placement could be better.

As our time ran out we cleaned up the range and went outside to review. I pointed out Chris had to work on keeping his finger off the trigger and Marion had a tendency to point the gun too far to the left. It wasn’t breaking the 180 but it didn’t need to drift that far. I told them they did really well and I didn’t have any problem recommending they were ready, skill wise, for Insights General Defensive Handgun class. I don’t think I have ever told a new shooter that after just one lesson. They really did do great.