I was given a free holster by Craft Holsters on the condition I review it on my blog. I received it several weeks ago but I was extremely busy at work (new invention disclosure came out of it and was sent to the patent attorneys just yesterday). I had looked at it some but didn’t actually try using it until yesterday.

I borrowed a true 1911. This combination worked. Pictures: 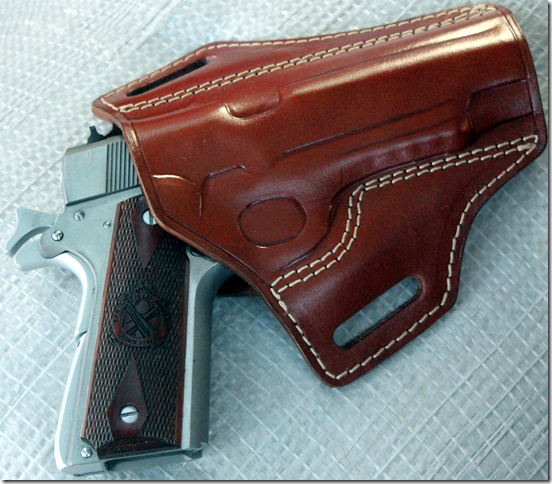 The angle is a little more than I am used to with my usual holster but it worked just fine for me.

I am a little concerned about the mouth of the holster and the potential for collapse. This is not an inside the waistband holster so it doesn’t get much pressure on it. But it was much more flexible than I am used to.

It could be that if the holster was intended for a true 1911 the fit would be more snug. Craft Holsters sent me a “break-in kit” so I’m pretty sure they expected it would be a snug fit. But with the given holster and gun tested the gun would fall out when the holster was turned upside down. It was a little more snug when on my belt but it expect that after some wear if I were to do a forward roll the gun would fall out. And possibly even just running and jumping would jeopardize control of the gun. But, again, this holster was intended for a different style of 1911. A true 1911 holster might have eliminated this complaint.

On a positive note, the price is $59. This is about half what I would normally pay for an IWB holster for my STI. Also, it is nice looking and comfortable.