Yesterday I noticed my phone wouldn’t lie flat. Odd. Upon further investigation I realized the battery was swelling. It’s a Galaxy S8 Active. The back doesn’t come off to allow you to replace the battery.

I looked on Amazon for a new phone and then decided to look for a battery anyway. Success! It includes tools and adhesive to take the phone apart and glue it back together. I ordered the battery.

But I need my phone for accessing things at work because of the two factor authentication. I can’t just put my phone in an old ammo can in the back yard to avoid explosion and fire hazards then run out there to check text messages every once in a while.

I made an indoor quarantine for it: 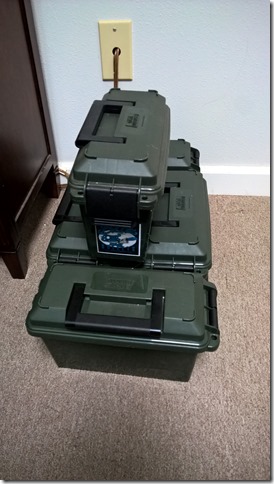 The phone is inside two zip lock bags, on top of an old cookie-sheet, and surrounded by nearly 200 pounds of lead (and brass).

I pulled the phone out a few minutes ago to check something and the swelling has increased:

The new battery is supposed to arrive in the next 45 minutes and the phone will then undergo battery replacement surgery.

Update: The battery has been replaced and the phone is functional. And it is in the process of being fully charged.

The battery replacement is not for the faint hearted. There were two electrical connecters which were the smallest I have ever seen. I put on my magnifying glasses to see many of the components I needed to manipulate. The adhesive replacement was a bit of a sticky problem (pun intended). They supplied two large strips that needed to be cut into six (or more) pieces. No instructions on how to use the adhesive.

13 thoughts on “In forced quarantine”