Six weeks ago I took a new shooter to the range. Today we went to the range again for her to try out numerous guns in preparation to buy a gun and take a class.

I had to correct her stance and give her some hints on the grip but after that she did really well. There were a few flyers but most were good solid A-Zone hits.

The stock was too long and she ended up putting it on top of her shoulder to get the proper eye relief and get it close enough she could hold it up. Still, she had great hits.

I had her shoot the Ruger P89 only in single action mode. My goal was to see how she handled the 9mm recoil in a fairly heavy gun. If that worked out okay I would have guided her to Glock or S&W M&P style gun.

Great hits (smaller holes are from the .22 rifle): 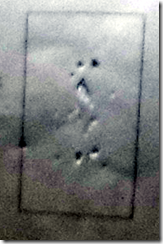 There was one flyer: 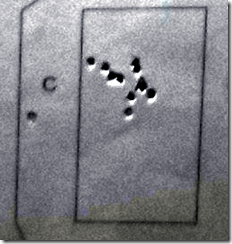 She said she liked that gun the best so far.

On to the Gun Blog 45. Even though these were light loads with a MV of just under 775 fps (PF of about 178) she fired one shot and said that was enough.

I rented a Sig 238 (.380 Auto) and she liked it before she even touched it. We did a little dry firing, then actual shooting. She really liked it. She had great hits and after shooting about a half dozen magazines said she was done. She really liked the .380.

She had three flyers. But she shot a lot more good solid hits. 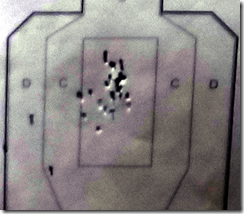 We put away the guns, washed up, and went to the store where her husband ordered and paid for a Sig Sauer 238 and two extra magazines.

I will probably do some more coaching to prepare them for the May General Defensive Handgun class from Insights.