The democrats will stop at nothing to push their agendas. I’d love to know how many acts of violence have been orchestrated by them to push gun control. I suspect the results would match our suspicions. 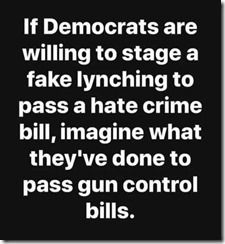 Red Nation Rising @RedNationRising
Tweeted on September 8, 2019
[Back in the late 1990s this was a common suspicion. I never heard anyone say they thought the shooter themselves planned it as a means to pass gun control bills. They mostly suspected it was some sort of mind control or “programming” of mentally unstable people. I thought it extremely unlikely.

The probabilities increased dramatically with the Las Vegas shooting. A rich, old, white guy was a different demographic than we had ever seen before. There was picture of the murderer at a Hillary rally wearing a vagina hat but there was little else to gives us clues as to his political persuasion or possible motivation. The expense, planning, and horrendous number of victims indicated something well beyond what other murderers had demonstrated.

Then there was another mass murder, I forget which one, with a manifesto explicitly advocating more gun control. There are no more probabilities. There is only certainty that it has happened. The questions are now, “How many times has it happened?” and “How many more times will it happen before we can put an end to, or dramatically reduce, their incredibly evil activities?”—Joe]