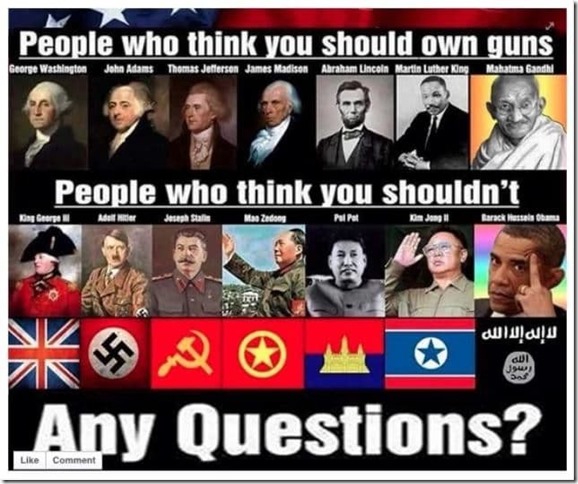 At first I thought this was awesome. It’s not just old white guys supporting the right to keep and bear arms to protect themselves from a slave rebellion. Gandhi in this category might be a surprise to some, but it’s true (see also here). Martin Luther King Jr. is another which might also surprise people, but again, it’s true.

But after more thought I realized the tyrants listed are actually admired leaders to some. For example, Joseph Stalin and Mao Zedong each murdered 10s of millions of their own citizens after disarming them. But yet, there are still people today that not only advocate for the political philosophy of these tyrants but admire the tyrant for their accomplishments.

Hence, freedom lovers, as well as hard core Marxists, can both look at this image and find it supporting their world view. When you think about it, that’s kind of weird and messed up.

4 thoughts on “Think about it”