Yesterday I participated in a USPSA match at the Marysville Rifle Club. One of the stages was a first for me in a couple ways. The first part of the stage was fairly ordinary. You started in a shooting box and upon the start signal you drew your gun and shot three targets partially hidden behind a picket fence. From there you had to go maybe 75 feet forward and around a corner where a second set of targets became visible.

This was the most interesting portion of the stage:

The interesting part of the stage are the targets in the distance on the right. There are three paper targets behind a sheet of black plastic (soft cover). In front of two of the targets are Mini-Poppers*. These targets are about 25 yards away. You can’t see most of the paper targets because of the soft cover, you have to shoot the steel targets down to get good access to the paper targets, and you have to shoot these fairly distant targets from below a barricade. Going prone left you with the problem of shooting the two targets to the left at almost a 90o angle and while prone I was unable to get enough elevation to hit the distant targets and still be stable. I, and many others, squatted or kneeled to shoot below the barricade. Being a tall person this pushed my aging flexibility to the limit and a little beyond. My back felt a little odd for the rest of the day but is almost normal now.

Here is how the stage (and match) winner shot it in Open division in 19.30 seconds:

* See here for a picture of one. Official dimension are as below: 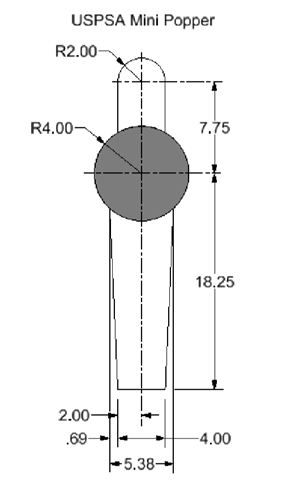 2 thoughts on “USPSA stage first for me”