Prior to the Area One match in Bend Oregon I expressed some concerns about making Major Power Factor. It turns out I did just fine: 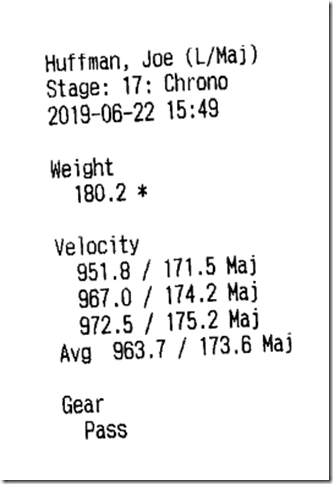 I saw the chrono team weigh the bullet before getting any velocity measurements, 180.2 grains, and knew I was going to be okay. My sample of 20 had a minimum of 178.3, a maximum of 180.7 and a mean of 179.2. I was concerned they might pull a 177 or something. Then, if the velocity was really low for some reason I could be pushing the threshold and perhaps break into Minor Power Factor (< 165). But the velocities were good. Had they pulled a 177 grain bullet and measured the same velocities the power factor would have still been 170.6 and comfortably in Major.

The odds were low of getting a low velocity since my measurements indicated a mean velocity of 978.4 with a standard deviation of 10.6. But still, you never know how the tolerances might stack up against you on any given day. As it is I suspect the chronograph they used would not agree with my chronograph, which is another variable that is difficult to plan for.

2 thoughts on “Chronograph stage at Area One”