A domestic terrorist attacked the holding facility for the U.S. Immigration and Customs Enforcement a few miles from where I live:

Early Saturday morning, that man, Willem Van Spronsen of Vashon Island, returned to the Northwest Detention Center, the holding facility for the U.S. Immigration and Customs Enforcement, this time armed with a rifle and incendiary devices, according to Tacoma police.

Officers were called by an ICE employee who saw the rifle. Soon after they arrived, officers reported “shots fired,” said Tacoma police spokeswoman Loretta Cool, although it is unclear who fired first or if Van Spronsen fired at all. The Pierce County Medical Examiner’s Office classified his death as a homicide.

We Are The Fire That Will Melt ICE – Rest in power, Will Van Spronsen [Olympia WA]

Early this morning around 4am our friend and comrade Will Van Spronsen was shot and killed by the Tacoma police. All we know about what lead up to this comes from the cops, who are notoriously corrupt and unreliable sources for such a narrative. The story that we do have is that Will attempted to set fire to several vehicles, outbuildings and a propane tank outside the Northwest Detention Center in Tacoma which houses hundreds of immigrants awaiting hearings or deportations. He successfully set one vehicle on fire and then exchanged gunfire with Tacoma police officers who fatally shot him. He was pronounced dead on the scene. We find his actions inspiring. The vehicles outside the detention facility are used to forcibly remove people from their homes and deport them, often to situations where they will face severe danger or death. Those vehicles being destroyed is only a start of what is needed. We wish the fires Will set had freed all the inmates and razed the entire Northwest Detention Center to the ground. And we miss our friend and wish from the bottom of our hearts that his action had not ended in his death.

Will Van Spronsen was a long-time anarchist, anti-fascist and a kind, loving person.

He left a letter before executing his attack. It sounds like he was deliberately committing suicide by cop (click to enlarge): 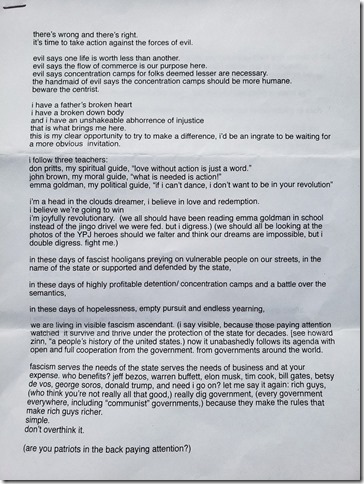 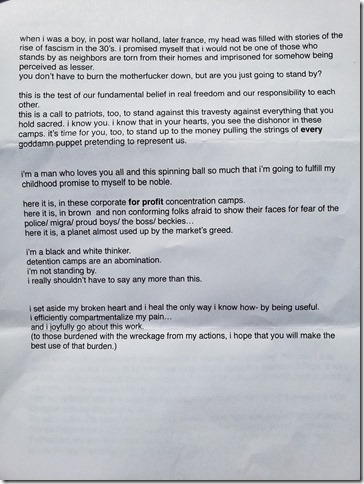 This is totally on the backs of the political left. They are the ones fanning the flames.

The police have been arresting some of these thugs. But I expect the violence will continue to increase until arrests, convictions, and the occasional justified homicides have thinned their ranks much further. It’s too bad the leaders of the political left are not taking legal heat but that’s not the way it works. It’s the useful idiots like the yesterday’s terrorist who pay the ultimate price for the political evil of the left.

10 thoughts on “Antifa takes a casualty”