For years I’ve wanted to be able to legally conceal carry in Oregon. It seems that there are several times a year when Barb and I go through there. Last weekend I shot in the USPSA Area One Championship (results here, I came in 81st out of 118 in Limited) outside of Bend Oregon. About a year ago we visited Crater Lake (where Barb proposed to me) and several other interesting parks with interesting geological attractions. We have gone to Portland to Powell’s City of Books and Voodoo Donuts. And while Lava Beds National Monument is actually in California, I would like to take her to visit that someday. It is just over the border from Oregon and we would probably drive from Washington. The problem is that Oregon doesn’t recognize concealed carry license from any other state.

Since I was going to be in central Oregon for several day for the match I looked up the requirements for getting an Oregon Concealed Handgun license.

Most of the counties will not accept no Oregon residents even though the law allows for it. The counties add further restrictions such Columbia County:

You must have a current Washington State Concealed Handgun License to qualify for your Oregon permit. This permit can be used as one piece of identification when applying for your Oregon CHL. You must write a letter to Sheriff Dickerson stating why you want an Oregon Concealed Handgun License.
Your reasons must be compelling in nature. There will be a $10.00 administrative fee. The fee is applied to the cost of regular monitoring of criminal histories of Washington residents holding any type of Columbia County licenses or permits through the Sheriff’s Office.

OUT OF STATE APPLICANTS: All out of state new applicants and renewals must include a statement of compelling business interest or other legitimate demonstrated need which exhibits a correlation to Gilliam County.

Oregon has 36 counties. I looked up the CHL requirement for 17 of them, working my way outward from my travel paths for the match, before finding one. The Grant County Sheriff’s office was very friendly to me. I made an appointment for 9:00 AM, showed up about 8:20 because I was concerned about finding the place. I offered to come back at the appointment time but the nice deputy, Anne Marie (I think), told me to come on in and she would take care of it.

About a half hour later I walked out with my Oregon CHL. It’s a nice addition to the family: 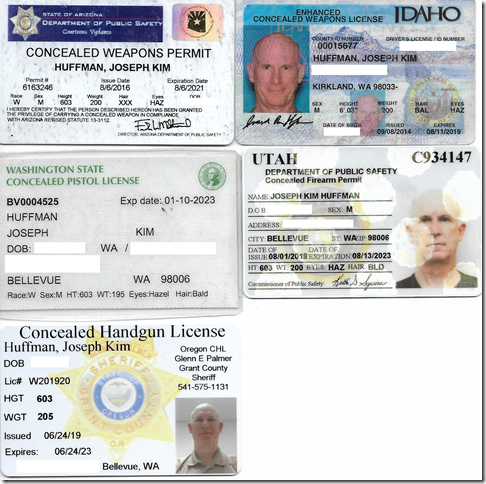 13 thoughts on “Addition to the family”