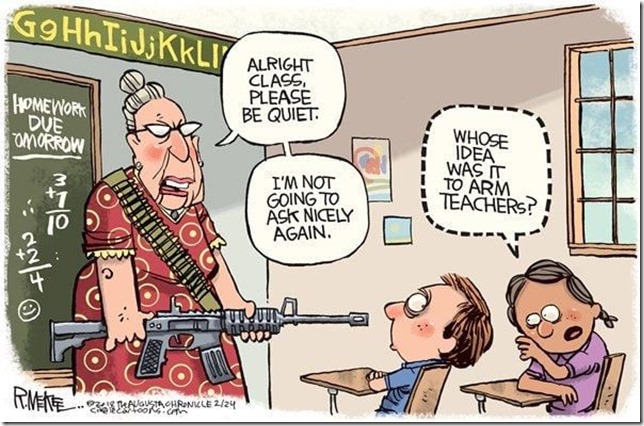 This is a based on what has to be a deliberate lie. Lyle said it best yesterday:

There’s that insidious “Arm Teachers” lie again. “Arm” is a verb. It’s something you’d be doing TO teachers; arming them. As though they don’t get a say in the matter. That’s the big lie in all of this. It evokes images of poor old Mrs. Jones being dragged, kicking and screaming, out of her Kindergarten class and hauled, by grim men in sunglasses, to a shooting range where she’d be forced, crying and shaking, and against everything she believes in, to learn to shoot a 44 Magnum.

In fact all anyone ever wanted was get the fuck out of the way of those teachers who already have training and carry permits, who are already carrying guns responsibly everywhere BUT the schools they work at, and allow them to also carry at school where they could then have a chance of defending innocents should the need arise.

I think part of the problem is that anti-freedom people find it difficult, or even impossible, to imagine a solution to a problem to involve less government.

Closely related, they are unlikely to ever admit that government caused a problem which is now in need of a solution. The “gun free zone” concept was sold as a government solution to a relatively rare problem. The unintended (I’m being generous with giving them the benefit of the doubt) consequences of this was mass shootings in these “gun free zones”. The last number I heard was something over 90% of all mass shootings occur in these victim disarmament areas. Mass shootings are a government created problem. The politicians who implemented these murder zones should be prosecuted.

The whole concept of “free markets and free minds” is alien to them. Alien, scary, and to be fought against with all power at their disposal. And when that power isn’t enough they must diminish the power of those who oppose them. Hence, disarming those who value liberty becomes a high priority.

8 thoughts on “Gun cartoon of the day”