Yesterday Dana and Chris from Barb’s Book Club went to the Bellevue Gun Club with Barb and I. Neither had even touched a gun before.

It went well. As usual I taught them how to shoot a pistol since it’s an indoor range with only 25 yards available. I did the usual stuff regarding safety, then stance, grip, sight alignment, sight picture, dry fire, and finally had them take their first shots with a suppressed .22 from 10 feet away from the target.

The following three pictures are by Barb. Yes, there is something wrong with the stance and grip in each of the pictures. They were still working on getting everything correct at the same time. It got better latter on before it deteriorate as they got tired at the end. 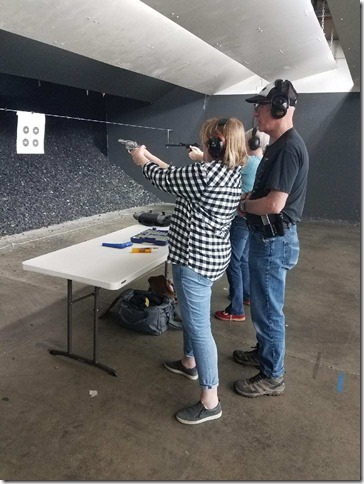 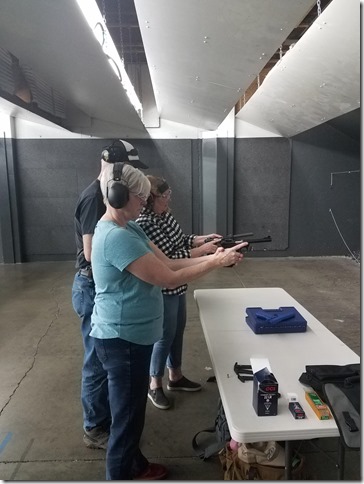 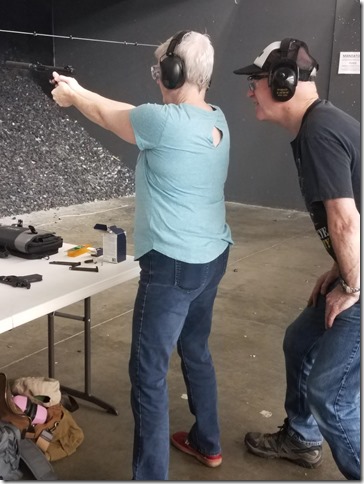 I also talked them a little about ammunition. The bullet, the shell casing, powder, and primers. After I showed them rimfire and center cartridges Barb spoke up, “I didn’t know that! So that’s what you meant by that all this time.” Whoops! I thought she knew.

Dana had some problems at first. The shots were going all over the place. Chris’s first two shots were several inches high but close to each other. I asked if the top of the front and rear sights were level with each other and without a word put the next several shots into the bulls-eye. Okay, that’s an acceptable answer.

Dana shot again and after asking a few questions all of a sudden many of her shots started going into the bulls-eye. She had only been using the front sight. Once she used the rear sight in combination with the front sight things worked much better. Imagine that.

I had them shoot a .22 revolver in single action mode. Then had them dry fire in double action mode and advised them that in general they would probably be happier shooting semi-auto handguns.

Near the end of our reserved time we put up two USPSA targets and I talked to them about self defense shooting. This included where to shoot, what to expect in terms of the threat response to hits in various locations, and when it was legal to shoot.

After a couple of magazines through the Ruger 22/45 Mark IIIs I had them start from a close ready position and then push out to fire first one shot at a time then two shots at a time. They did very well with all shots in the lower A-Zone (except the two Chris tried in the upper A-zone). I was very pleased with all the progress they had made and they thanked me multiple times.

At the end of the month another new shooter from the book club is scheduled to go to the range with us.