For USPSA matches I’ve been using 40 caliber 180 grain, polymer coated, Truncated Cone, bullets from Black Bullets International. They are very accurate, clean to reload, clean to shoot, and don’t have a jacket that comes back at you when you shoot at steel. I have reloaded almost 11,000 rounds using these bullets.

My only complaint about them is the quality control appears to be a bit marginal. One time I found a 125 grain 9mm bullet in with the 180 grain 40 caliber bullets and a few bullets which weighed as little as 177.5 grains.

The most concerning to me, which isn’t that big of a deal if you take it into account in your reloading, is the weight variation. They are advertised as 180 grain bullets. I have had batches that averaged 181.26 grains. And, most recently 179.2 grains.

Looking a bit closer at the data (a sample of 20 bullets) I found:

If I had assumed the bullet weight was the advertised 180 grains, adjusted my load for 925 fps to get a 166.5 Power Factor and expected to meet the 165 minimum PF required to “make Major” at a USPSA match I would have ended up shooting Minor with a PF of 164.9 if chrono man had pulled a 178.3 grain (or less) bullet. This would have made me rather annoyed. One has to take into account the variation in bullet weights too, not just the average or the minimum from a sample. The statistics are a bit complicated and beyond the scope of this blog post but after taking into account the weight variation, velocity variation, and temperature sensitivity of the powder I had to load for a PF of about 175 at 70F to have less than a 10% chance of shooting Minor at a match where the chrono tested was done when the temperature was near freezing.

Okay, fine, that’s not really a big deal. I can tell the difference between a 175 PF load and a 165 PF load but it doesn’t make that much of a difference in performance.

Today I found another thing to annoy me about their quality control: 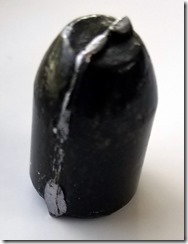 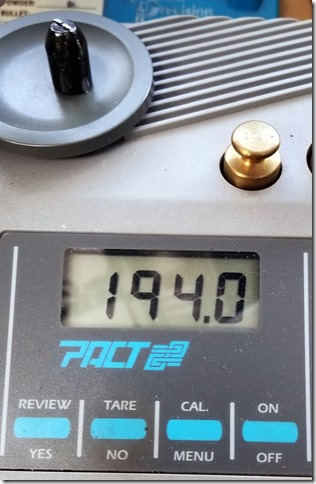 It looks as if the bullet mold was not completely closed when the lead was poured. Why wasn’t that caught by some quality control process? When Barb and I toured the Montana Gold Bullet manufacturing facility QC was clearly a big deal. The bullet above clearly would have been rejected. But I have other indicators that Montana Gold may be an exception in the QC department.