I’ve been getting copies of scanned pictures from my brothers recently and I thought I would share some of them. They show what it was like growing up as a privileged white male.This is the first house I lived in. The man in front is my step-grandfather. I’m being held by Mom on the front porch. 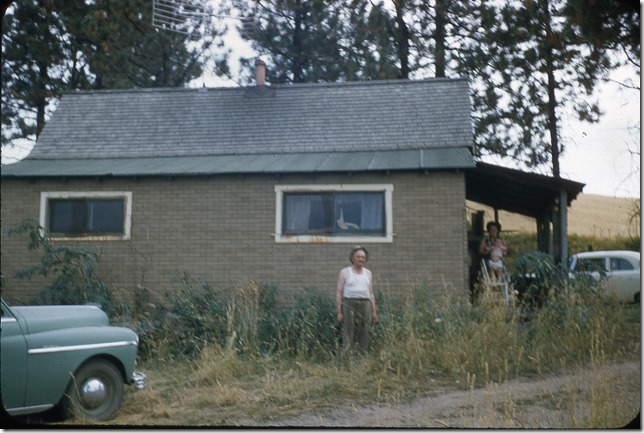 And another of me with my step-grandfather in front of the same house. As you can see, to live in such a house was almost certainly the envy of the entire neighborhood. 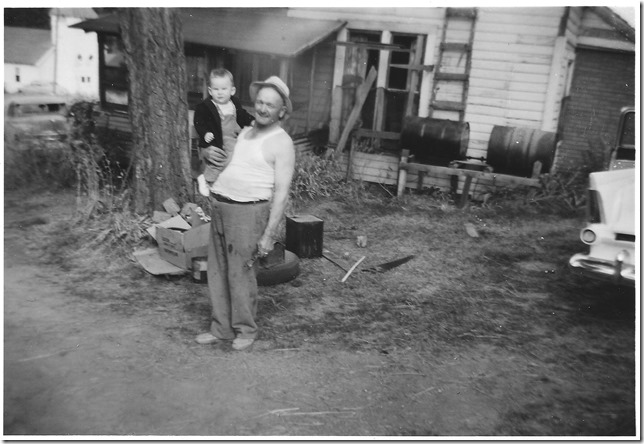 Inside was plush as you can see by this picture of Mom washing dishes. We even had running water and cupboards! There were no doors on the cupboards though. That would have to wait until our next house. 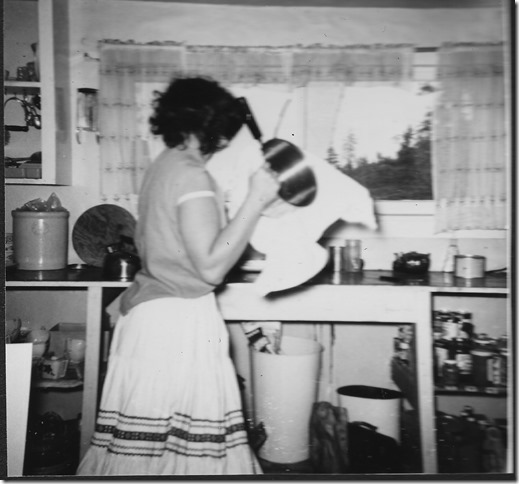 By the time I was three we moved to a bigger, much nicer house a couple miles away. As I was no longer wearing diapers and since we didn’t have an indoor toilet I had a little “potty chair” on the back porch for when it was too cold to go all the way out to the outhouse by myself. And it did get cold at times. 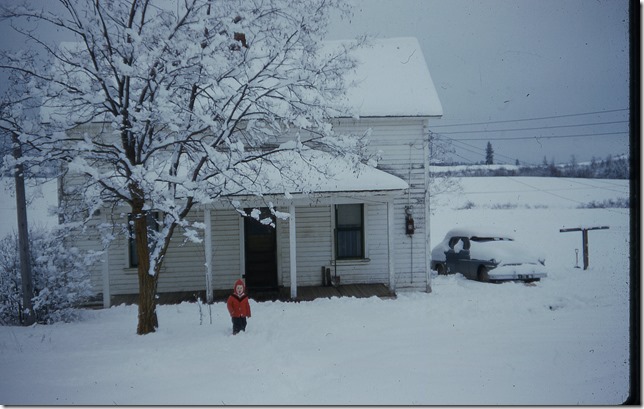 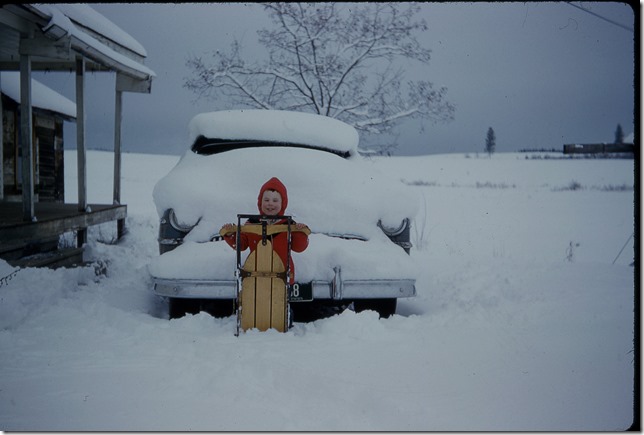 Here is another view of the house and our car with Dad and I. 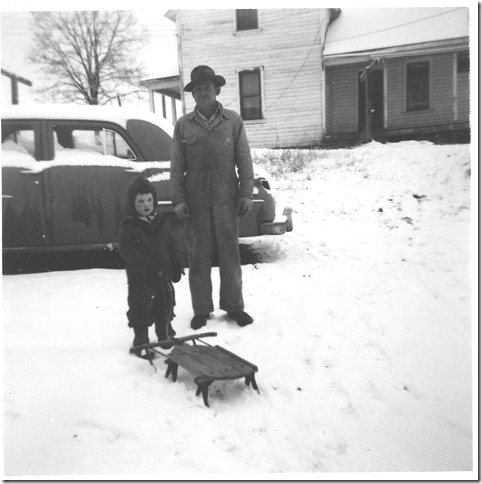 This is me on the front steps. 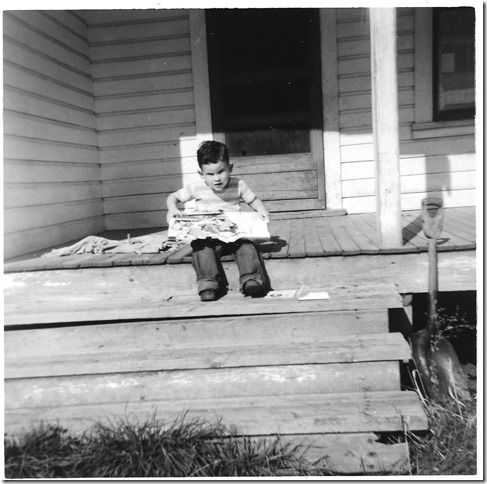 During the summer I helped Dad farm. In the picture below I’m taking care of the water jug. It was a one gallon glass bottle wrapped in burlap which was soaked in water to keep it cool. In the background you can just barely see water running down the draw. I used the water there to keep the burlap wet. 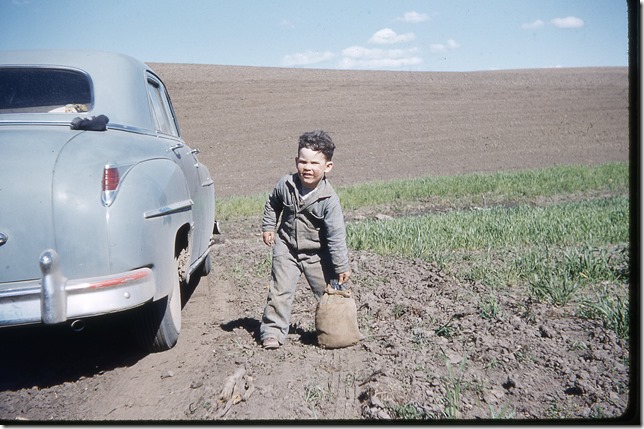 When I was four years old we upgraded houses again when Mom, Dad, and my Uncle Doyle purchased some farm land, a house, and other buildings. This house had an indoor toilet! We lived in it for about 10 years. I got my own room when I was a teenager. In the picture below, of the south side of the house, you can see a window of the room I had for a time on the lower left. Around the left corner on the west side of the house was another window.

That single pane window on the west side of the house had a crack in it which had been covered with masking tape. One winter, during a blizzard, it got so cold, the snow was so fine, and the wind so strong that snow came in through the crack and formed a layer of snow on my pillow beside my head. I woke up in the middle of the night dreaming that I was hiding from the abominable snowman in a snow drift. 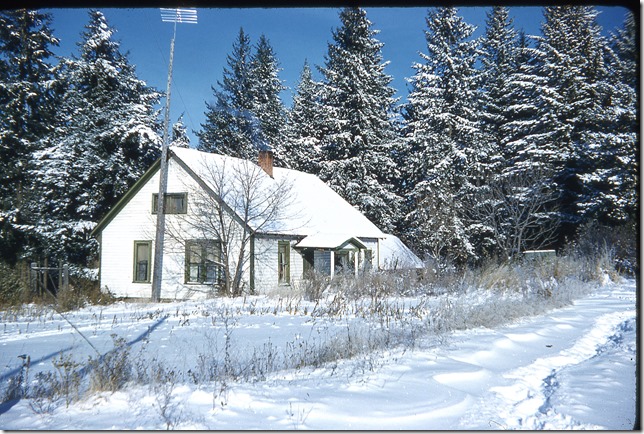 This is Mom in the flower garden. The front door, seen in the top right of the picture below, could only be opened with great difficulty because the house and porch had settled into the ground different amounts. The porch was at a different angle from the house and the door would bind up against the porch. We almost never used the front door. I think the only time we opened it, part way, was to get some extra air circulation during the summer when it was hot.

The buildings were in poor shape and most of them were torn down within a few years. Here are pictures of some of them. 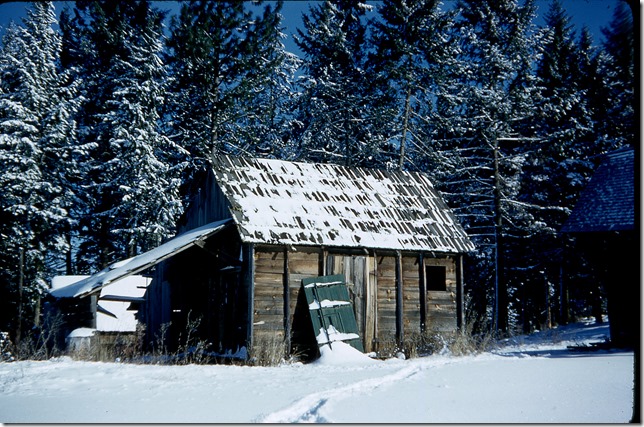 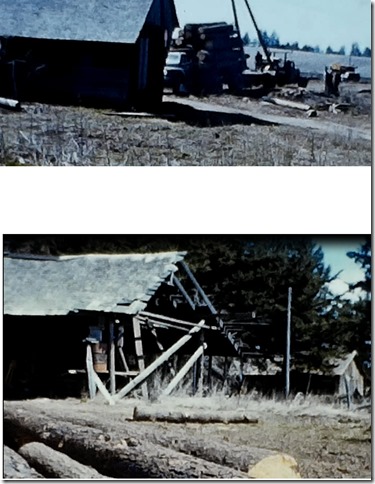 This is my younger brothers and I with our dog in front of the barn. The barn is the only remaining building and can be seen on this blog as one of the rotating header pictures. Notice my fine fitting tailored jacket and hat? I remember coats being purchased a couple sizes too large and worn until they were a couple sizes too small. It appears the same went for my hat. 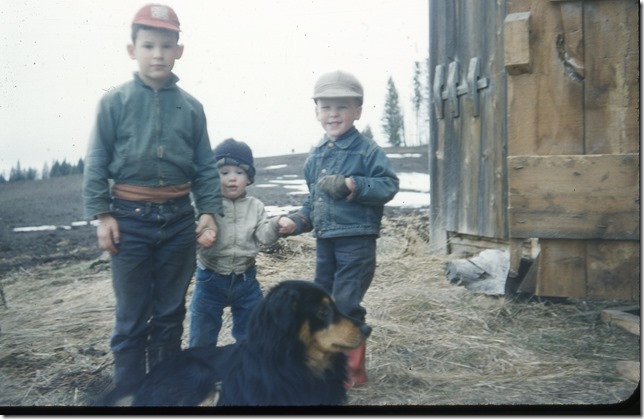 This is the first combine I remember. It was a John Deere model 35. Notice the high tech steel wheels. It took one person to drive the cat, one to “punch header”, and one to run the leveling device and brake. The brake worked by pushing a wood block against one of the steel wheels. This combine still exists and is in the picture of the barn linked to above. 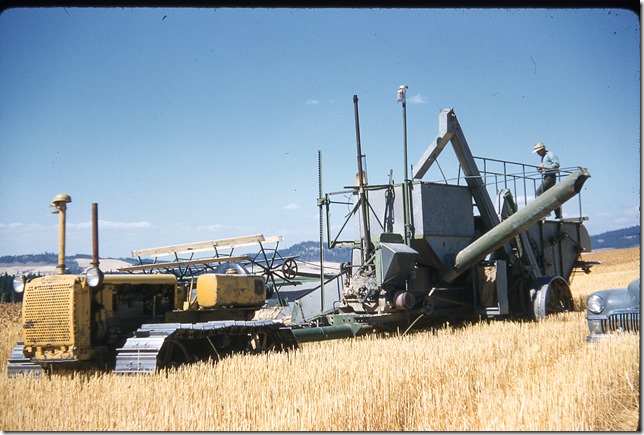 I think I was in the third grade when I got the football for my birthday present. 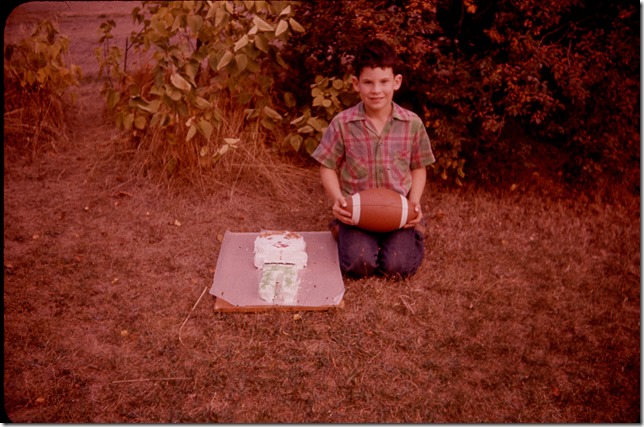 Frequently farming is very dirty work. In the picture below Dad has stopped the tractor and is posing for the picture or you would see a cloud of dust. I know this because I can see the clutch is disengaged and the throttle is at an idle. We still have this tractor and I use it every couple of years to bulldoze dirt for Boomershoot. When I was in the third grade Mom would pick me up after school and take me to the field to drive this tractor by myself until it was dinner time. 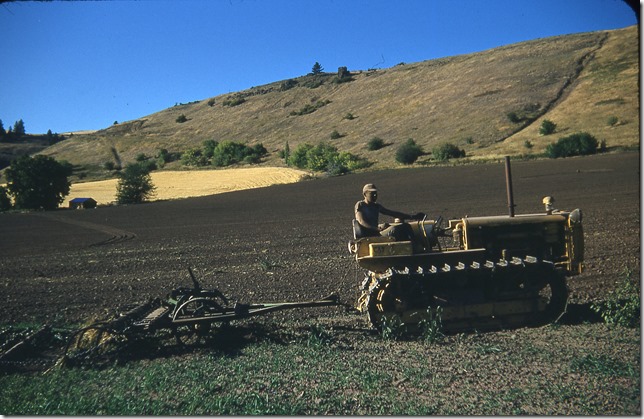 Here is a cropped version of the picture above. See how dirty Dad is? The dirt will literally pile up on your arms. You will have to rotate your arm to get the dust to fall off so you can read your watch. When I was driving tractor in the summertime I would sometimes chew gum so I wouldn’t feel the grit between my teeth. After you got off the tractor you would notice your nose was sort of plugged up. When you blew your nose big blobs of mud would come out. We would take baths once a week (whether we needed to or not) and the bathtub had a mud sludge in it when we drained it. 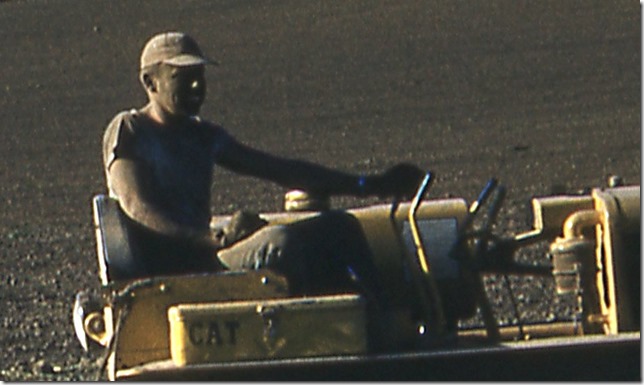 This is the next combine I remember. A John Deere model 45. I rode on the combine a lot. 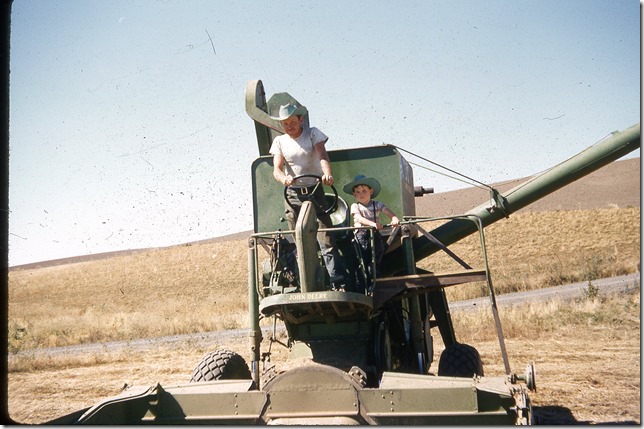 This is the next combine, a John Deere model 55. With my step-grandfather, grandmother, brother Doug and I. During harvest I rode this combine with Dad until I got big enough, about the fourth grade, to drive the trucks. 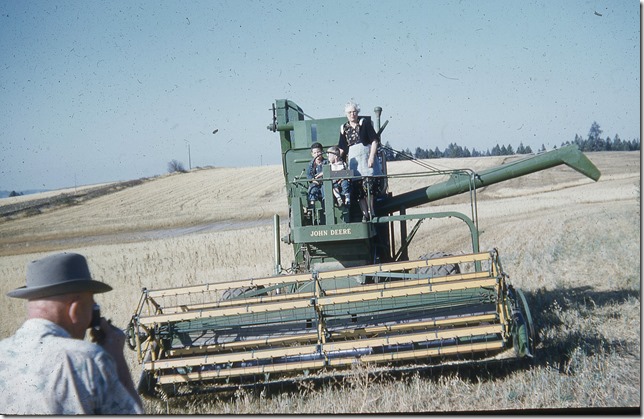 A few years after we moved into the house with the indoor toilet Mom and Dad starting building a new house. Digging the basement with the cat turned out to be a bigger job than expected. There was hard rock on one side and the cat couldn’t tear it out. 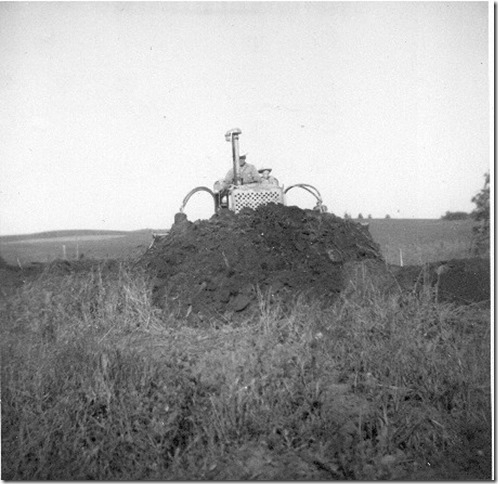 We ended up using explosives. The loose rock completely filled the previously excavated hole and heaped broken rock up in a big mound over the hole. It took most of the summer, bulldozing between the farm work, to clean the rock out of the hole in the ground that was to become the basement. 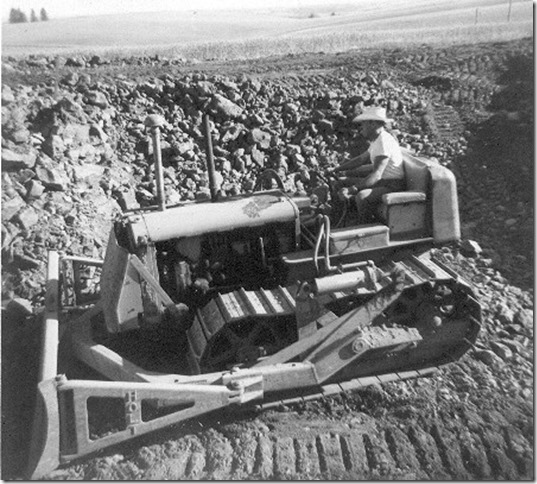 Here is Dad and I (top center) working on the new well when I was 12 years old. 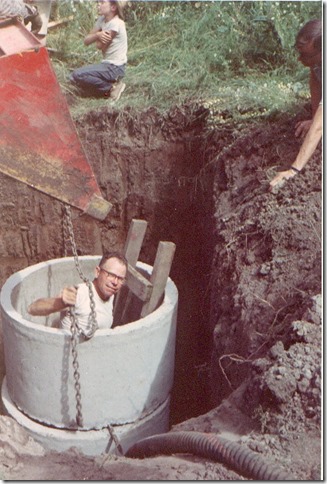 I drove lots of nails, carried tons of lumber, sheetrock, tar paper, roofing, and other building supplies. I also did a lot of the electrical work and helped with the plumbing. 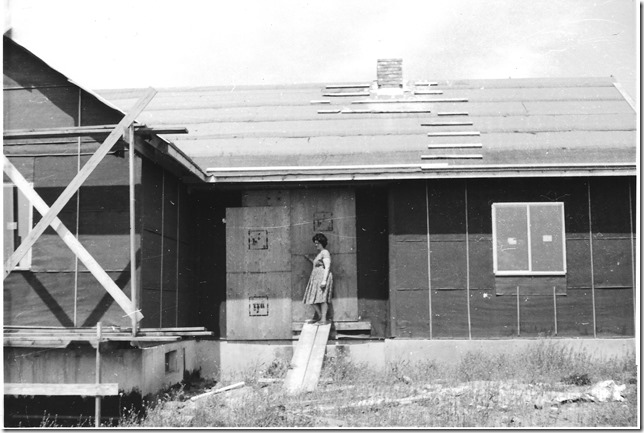 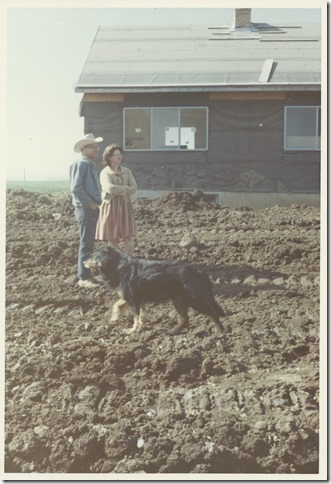 We moved in just before I graduated from the 8th grade. This is what it looked like. 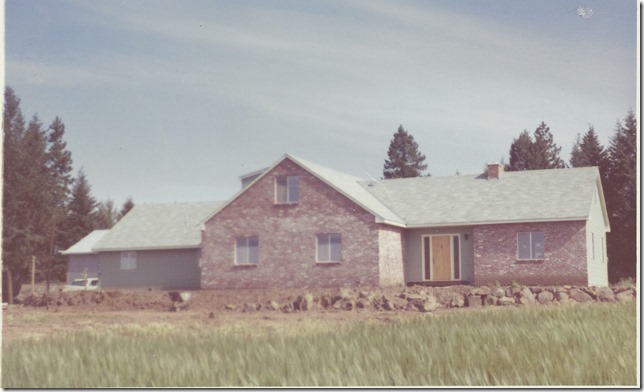 I’m leaving out the parts about the two room school house with eight grades, the abusive older classmates, the teacher with a duplicate personality of Captain Queeg* I endured for three years. And there is also the part about painting houses and doing electrical work while living in a lumberjack bunkhouse to pay for most of way through college to get my electrical engineering degree.

And that is how I came to live in a nice house and have the life of a privileged white male.

* I read the book in high school and cried myself to sleep each night after reading it and having flashbacks of life in grade school. The same happened when I reread it in late college. I expect the same would happen if I were to read it again today, many decades later. The guy, in essence, had two different personalities. The personality on display to adults was the polar opposite that which frequently came out when there were only kids around. They didn’t get rid of him until after I had graduated from the eight grade. I made numerous plans to shoot and kill him but I wasn’t completely sure I would get away with it.