Mom died in 2012 and Dad died in 2014. My younger brothers have been slowly cleaning out our parents house and recently told me that at the present rate they should be finished by, IIRC, 2050.

In my last trip to Idaho there was a stack of stuff waiting for me. The following newspaper clipping was among the things I found: 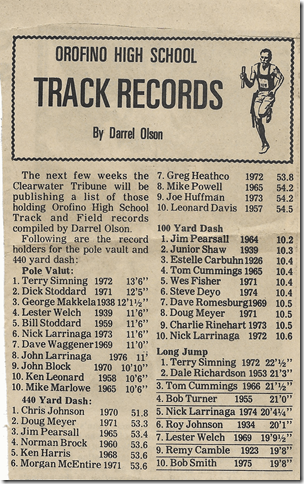 In the 440 Yard Dash section I’m listed as tying for 8th and 9th place for all-time record times. I don’t think I knew this. I never thought myself as all that great. Doug Meyer (2nd), Morgan McEntire (6th), and Greg Heathco (7th) were competing in some of the same years I did and I compared myself to them. And Olsen frequently talked about Chris Johnson (1st). Johnson was rather ordinary until his senior year and Olson said that he just had to give Johnson the instruction to lift his knees more. The result was amazing. So, I indirectly compared myself to Johnson as well. Olson was never able to figure out what to tell me so that I could do significantly better.