This is an individual who wants to ban guns — except he wants to kill people.

Ozzie Knezovich
Spokane Sheriff
February 21, 2019
Washington Man Arrested For Allegedly Vowing Sheriffs Who Oppose Gun Control Law ‘Will Be Shot. By Me.’
[Well, of course. As Lyle pointed out a few days ago when the question “Why are anti-gun activists so violent?” came up again:

When you turn that question around and ask it the other way (Why are the violent so opposed to honest people being armed?) then it pretty well answers itself.

That an obviously violent person thinks it is so vitally important that the guns of common people must have their guns taken away is one of the best reasons possible to hold on to your guns and prepare to use them.

Here is a picture of the thug: 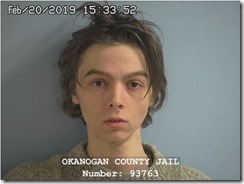 Be on your guard. He may not remain in jail long enough to cure him of his violent and Marxist ways.—Joe]

9 thoughts on “Quote of the day—Ozzie Knezovich”