The response is not as bad as I was afraid it might be. He didn’t say he was going try to prosecute them or anything. The worst he said was:

I am deeply concerned that the failure of local law enforcement to perform Initiative 1639’s background check requirement will jeopardize public safety in our state by allowing the sale of semiautomatic assault rifles to dangerous individuals not lawfully allowed to own a gun.  State law provides immunity to local law enforcement officers who run these checks “in good faith.” However, in the event a police chief or sheriff refuses to perform the background check required by Initiative 1639, they could be held liable if there is a sale or transfer of a firearm to a dangerous individual prohibited from possessing a firearm and that individual uses that firearm to do harm. In short, the taxpayers of your city or county assume the financial risk of your decision to impose your personal views over the law.

I find it very telling that he doesn’t address the possibility of liability if someone is denied their right to keep and bear arms is harmed because they were unable to defend themselves.

Near the end of the letter he attempted to peg the irony meter:

Under Article 1, Section 1 of the Washington State Constitution, “All political power is inherent in the people, and governments derive their just powers from the consent of the governed, and are established to protect and maintain individual rights.” As public officers, our duty is to abide by the will of the people we serve, and implement and enforce the laws they adopt.

He acknowledges the purpose of the constitution is to protect the rights of the people then he claims it is the duty of public officers to infringe upon the right of the people.to keep and bear arms.

Analogies to marijuana and immigration law enforcement are misplaced. This is not a situation where the
federal government is trying to force the state to enforce federal laws.

So… is he saying that it would be acceptable if they were to refuse to enforce Federal gun laws?

He might have been inspired to write the letter because of this map: 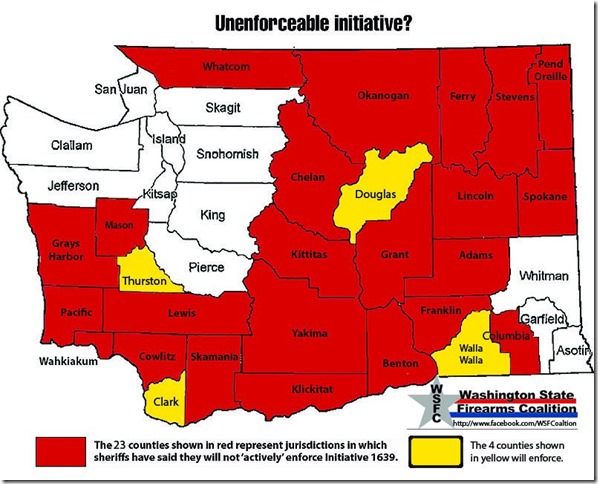 I’m keeping a copy of Ferguson’s letter in multiple places for use as evidence at his trial.