An estimated 287,400 prisoners had possessed a firearm during their offense. Among these, more than half (56%) had either stolen it (6%), found it at the scene of the crime (7%), or obtained it of the street or from the underground market (43%). Most of the remainder (25%) had obtained it from a family member or friend, or as a gift. Seven percent had purchased it under their own name from a licensed firearm dealer. 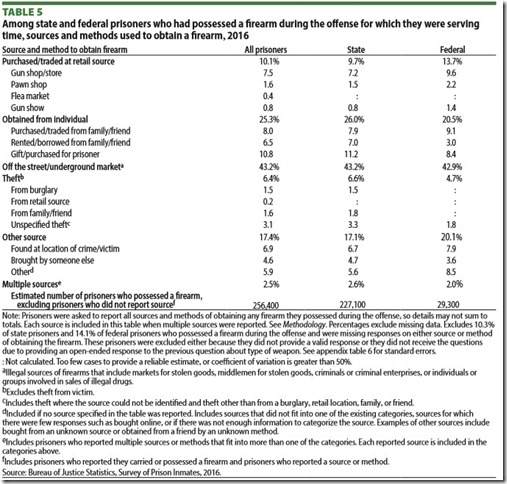 Mariel Alper, Ph.D., and Lauren Glaze
BJS Statisticians
January 2019
Source and Use of Firearms Involved in Crimes: Survey of Prison Inmates, 2016
NCJ 251776
U.S. Department of Justice
Office of Justice Programs
Bureau of Justice Statistics
[Using the percentages from Table 5, they add up to more than 100% (about 102%). I could find where this was explicitly stated but it seems this is because some prisoners (about 2.5%) obtained guns from multiple sources. Also note that it is possible, likely even, that those who obtained them from a gun store, gun show, or pawn shop were not prohibited persons when they purchased them.

So… the question is, “If anti-freedom people believe they can create a law to prevent gun possession by convicted felons what law would accomplish that?”

What would “Universal background checks” accomplish? At most, this would affect 25% (obtained from an individual) of the transfers. But how many of those transfers occurred before the person became a prohibited person? And if they are a prohibited person obtaining them from a friend or family is already against the law! Making it doubly illegal is nothing more than nonsensical.

And even if those transfers were completely stopped how many of those same criminals would then obtain their gun from different source such as the underground market or theft?

If the intent of “universal background checks” is to reduce access to guns by prohibited person it is clear it cannot make much, if any, difference. This is backed up by recent research as to the actual effects of background checks on violent crime. Hence, there are three possibilities:

Apply logical “and” and “or”s for the combinations of the possibilities however you deem appropriate.—Joe]

4 thoughts on “Quote of the day—Mariel Alper, Ph.D., and Lauren Glaze”