Today started out fairly typically for me as I went to Whidbey Island for a pistol match at Holmes Harbor Rod & Gun Club. The weather was beautiful and I took a few pictures on the ferry and, as usual, tweeted one of them:

Beautiful day for a ferry ride to Whidbey Island for a falling plate match. pic.twitter.com/t6O6v7k92l

We started shooting on time and things were going fairly well for me considering nearly everyone else was shooting Open class guns and I was shooting Limited.

Then about 11:15 a plane engine could be heard louder than usual and changed tone. Perhaps it went from moderate power to full power?

I wasn’t paying much attention. I was under a shelter and couldn’t see the sky. Others, at the end of the shelter could see in the direction of the sound and looked at the sky. They announced that it went down and very shortly after that we heard the thump as the plane hit the trees in the woods.

The event director, Steve, stopped the match and someone ran off the 200 feet or so to the restaurant to use the land line. The cell service is poor to non-existent depending where you are on the range so that was probably the most reliable means of calling it in. There was another plane in the air and circled the area where the plane went down. We talked about it for a bit. What should we do? What could we do? The woods were very thick. I wasn’t even sure we could make it through the woods from our direction to the plane crash area. Surely the airport, on the other side of the woods, would be the better approach. I told the event director, “I don’t think there is much we can do.” He agreed. And we finished shooting the match.

We just finished, and hadn’t even figured out who won the match when someone in firefighter clothing showed up. He asked us to shut down the range. They couldn’t find the plane from the other direction and wanted to try from our direction. “And can some of you guys help us search?”

We immediately agreed. As we started toward the woods where the plane went down we could smell the fuel. The firefighter told us that if we found the plane we should stay away because of the fuel. We didn’t want to risk starting a fire or getting caught in a fire.

We walked at a brisk pace down the road from the falling plate range past the open pistol bays to the trail that led into the woods. There was an archery target set up about 50 yards from the end of the road at the bottom of a draw with a trail to it. The walking was easy enough to there but the trail then disappeared.

Continuing straight was light brush and easy enough. But my impression from where the other match participants had indicated the plane went down it was off to our right. No use in us all staying in a group and since we didn’t really know where it was at, spreading out was probably the best plan even if the going was rather tough. I was wearing thermal underwear, blue jeans, a t-shirt, a sweat-shirt, my Boomershoot M-65 field jacket, gloves, eye and ear protection. I was basically “armored” against the brush. It was just below my chin. I could see over it for moderate distances. Most of the other people in the group were significantly shorter than I and would not have been able to see more than a few feet had they tried to navigate through this brush. I had to push it away and step over small fallen trees and watch for holes and ditches. It was slow going.

It was probably only about 225 yards into the woods when I came out of the thick brush into relatively thin brush within about 100 feet of the plane ahead and to the right of me: 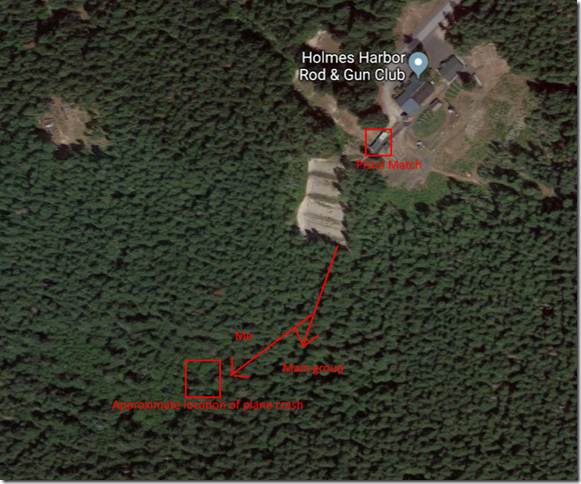 The picture below shows more context: 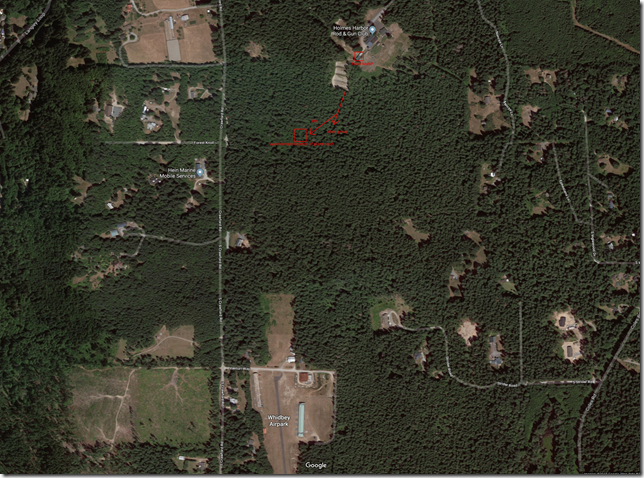 I yelled several times to announce that I had found it and kept my distance for a while.

There was no smell of fuel so I approached a little closer. The plane was badly mangled, upside down, and backward from the direction of flight. It had flipped after hitting the trees.

From the time the plane went down to the time I arrived at the site it was just under 30 minutes.

There were no sounds and no movement. I figured the pilot was dead or unconscious. I couldn’t tell if there was more than one person in the plane.

I took a picture and waited for the search and rescue people to arrive and take control of the scene:

The firefighter was the first to arrive after about two minutes and he radioed to others and informed them there was one person alive and one dead. I then saw the person moving their left arm occasionally. He asked me to use my cell phone to call 911 so they could get GPS coordinates to guide other rescue crew to the site. He radioed that there was no way for a helicopter to get in and to send in someone with a chain saw to cut a trail out.

A woman showed up from the west and began helping. I used my knife to cut a few cables holding the left wing to the body of the plane and then she and I moved the wing to get better access to the people in the plane.

More people showed up. Some were from the pistol match and some were wearing emergency clothing and radios:

We continued moving small trees and debris from the body of the plane and made plans to move the plane to get access to the female passenger.

When the plane was clear of debris we lifted the tail of the plane straight up. The engine of the plane was mostly broken off and the body hinged on the remaining metal that attached to the engine area. We held it directly on it’s nose while the rescue workers cut the seatbelt on both sides and pulled the woman from her seat. She moaned and cried out about her leg. They worked her free of the debris as gently as they could and moved her away from the plane to examine her as we tipped the body of the plane on over and gently set it down. Someone examined the male pilot for 30 seconds or a minute and announced, “There’s nothing.”

A man with a chainsaw arrived from the west and the original firefighter asked us to help the chainsaw guy clear a path. In part, I think he wanted us to leave so he and the other rescue people could examine the female passenger with a little more privacy. There were about 10 or 15 people onsite now and that was more than enough to help clear the path to the road to the west.

I headed back to the range to collect my gear and report to others that I was going to be later than expected for my appointments that afternoon.

As I drove away I came across two people from the match just outside the main entrance. They had walked out to the west and then down the road to the gun club. I drove another couple hundred yards and found a group of three walking down the side of the road. I offered them a ride, which they accepted and I took them back to the range and their cars.

News stories about the crash: