In 1999 I started loading for 300 Win Mag. In fact, I had the gun built with the specific intention of shooting a particular bullet which I planned to handload. The bullet was the Berger 210 grain VLD Target. At that time the BC was listed as 0.640. Then in 2007 I was looking at their website and discovered they had changed the BC to 0.631. It still didn’t fully explain the results I was getting but it was closer. Today I discovered they have changed the BC again. It is now listed as 0.621. That fully explains the results I was seeing. Whoops on their part.

I haven’t reloaded any of these bullets since 2000. It was time consuming. I would clean the primer pockets, trim the length, and individually weight each powder charge. I found that I got better accuracy at short ranges (less than 300 yards) and decent results at longer ranges with Black Hills Match (190 grain Sierra Match Kings with a BC of 0.533). And, most importantly, it saved me a lot of time.

I still have the powder and primers for the Berger bullets and figured it was time to load it up. I now have a much better tool for prepping the brass which speeds up the prep by about a factor of four.

Last night I was preparing some 300 Win Mag brass for reloading. I noticed that some of the brass I had used for the Berger loads had primers which were mushroomed: 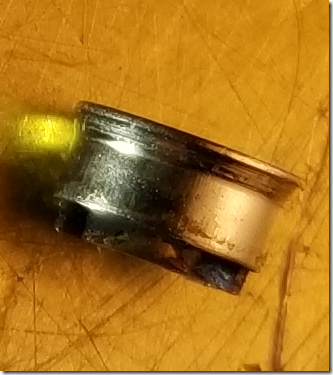 I checked my notes:

Starting loads are 90% of max.  My guess is that max should be about
80 gr. with the 210 grain bullet.  The Nosler Partition is a straight
shank bullet without a boat tail.  This gives it more bearing surface
and friction (especially without the moly) than the Berger will have.

I settled on a load of 78.7 grains of H1000 after firing charges up to 79.5 grains. I measured the base of the case for expansion as my indicator of high pressure and didn’t find expansion greater than with the light loads. It seemed good but the gunsmith who built the rifle told me an interior ballistics program he used said my load was unwise. I continued to use that charge with the few rounds (423) that I actually loaded.

That explains my mushroomed primers and validates my gunsmith’s concern. I need to redevelop my load and disassemble the existing ammo with the previous loadings.