The entire argument for gun control is built upon a false premise. The second amendment is not about self-defense from criminals.

As unpleasant as it may be for this modern society to say out loud, historically and constitutionally speaking, the right of the people to keep and bear arms has always been a right to protect yourself from those in power who want to enslave you. If America wants to engage in a real factual debate on the right to keep and bear arms, then it must be approached from the proper perspective.

A proper debate on one’s right to keep and bear arms is NOT one that is framed in the terms of whether you can feel safe from wicked and depraved people, full of hate and malice, who want to hurt you. You will NEVER feel safe from those people and those people will not cease to exist just because YOU are not allowed to legally own a gun. Why? Because those people do not care about laws and they will always find a way to hurt and destroy, with or without gun laws.

If society is honest and historically accurate, the only question that has any relevance to the gun control debate is,

“Do you trust those in government, now and forever in the future, to not take your life, liberty, or property through the force of government?”

If the answer to that question is “no,” the gun control debate is over. 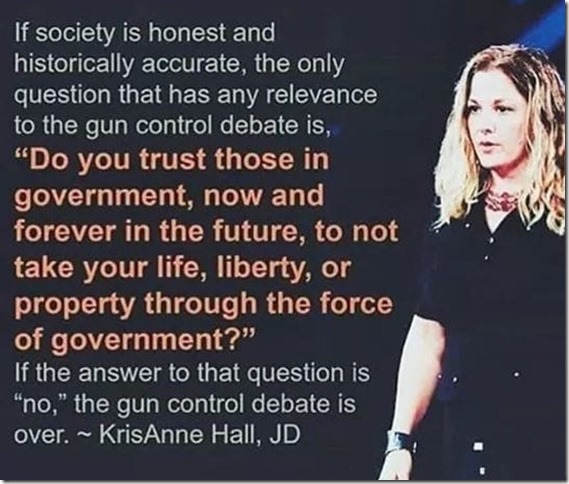 [I have nothing to add.—Joe]

6 thoughts on “Quote of the day—KrisAnne Hall”